In February 1986, Museveni named a new cabinet, which was comprised primarily of NRM and NRA members, but which also included representatives of other political parties and three members of the previous administration. A National Resistance Council was created to take over legislative duties until a new Constitution was written. At the local and district 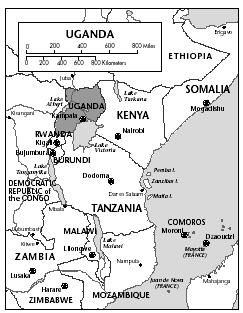 levels, Museveni established a system of "resistance committees," whose duties included local security and the elimination of corruption. Throughout his career, Museveni witnessed the civil disruption which was occurring throughout Africa. He concluded that much of the unrest was the result of political party divisions based on regional, religious, and ethnic distinctions. This conclusion led Museveni to limit the role of political parties in Uganda. One reason for Museveni's widespread support is his steadfast adherence to a (professional) code of conduct for his troops, which prohibits rape, pillage, and the murder of civilians. While not without unsavory elements, and clearly responsible for violations of human rights, the NRA has historically identified and punished those within its ranks accused of these crimes. This earned him a lot of trust from the Ugandan people.

During the first three years of Museveni's government, guerrilla activity continued. By 1989, the war had ended. Museveni was determined to root out corruption among the security forces, and established commissions to investigate charges of corruption and human rights violations. As a result, more than 80% of the police force was dismissed from service. In June 1987, the NRC offered amnesty to all rebel troops except those accused of murder or rape; by mid-April 1988, more than 30,000 rebel forces had surrendered to the government.

In February 1989, national elections were held, the first since 1980. The NRC was expanded from 98 members to 278 members, 210 of whom were elected. Ministerial posts were no longer reserved exclusively for appointed members, and 14 ministers and deputy ministers lost their positions. A new Constitution was promulgated in October 1995. It established a "no-party" state, at least through the year 2000. New elections were scheduled for May and June 1996. The elections were open to all, provided they did not organize as candidates of particular parties.

Presidential elections held on 9 May and parliamentary elections in June 1996 were deemed to be generally free and fair, within the limits imposed by the "no party" or "movement" based system established by the Constitution. Most observers and analysts acknowledged the advantage the system ceded to Museveni. Unable to organize under the auspices of political parties, Museveni's challengers were limited in their ability to raise funds and to campaign effectively during the short three-month electoral season. For many, the election was essentially a referendum on the validity of Museveni's system.

The results of the presidential election were unsurprising. Museveni took 74.2% of the vote. His runner up, Paul Ssemogerere, got 24%. His challengers claimed massive vote rigging, but international observers were unable to find evidence of electoral fraud. Inaugurated on 12 May 1996, Yoweri Museveni pledged to continue the process of democratization and economic recovery, which was begun during his previous 10 years as Uganda's national leader. His critics accuse him of lacking democratic credentials; of being a despot, be it a benevolent one, for suppressing political parties.

In June 2000, this matter was settled through a national referendum when despite accusations of vote rigging and manipulation by the opposition, Ugandans approved the no party system. He was re-elected to a second five-year term in March 2001. Museveni insists that he will abide by the Constitution and will stand down in 2006, but his 'Movement' is advocating for Constitutional changes to allow a third term. In May 2003, the National Executive Committee recommended that parties be free to operate subject to a national referendum next year.

Uganda, hard hit by the AIDS pandemic and once at the disease's epicenter, constitutes a rare African success story for its commitment to combatting HIV/AIDS. The WHO reported that rates of infection are dropping, and in one area they decreased from 27-30% of the population in 1993 to 11-12% in 1997.