Sopoanga came to power with the slimmest margin of victory—eight votes to seven, and he heralded his leadership qualities in 2003 by asserting he was fulfilling his campaign promises. He exudes confidence—in November 2002, Sopoanga stated "I feel secure even with the majority of one seat. That one is a very solid one indeed. This government will last the next four years." He is also pragmatic— Sopoanga believes in working with the opposition in what he terms the "consultation process." This strategy is one that might keep him in office and guarantee Tuvalu's political stability.

Sopoanga outlines four main issues facing Tuvalu: first, he envisions plans for a referendum on Tuvalu's potential status as a republic; second, he wishes to review a local government act incorporating a traditional system of providing communal services; third, to work for the decentralization of industries 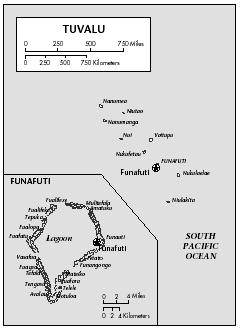 and development; and fourth, to confront the issue of urbanization and the development of Funafuti as the nation's capital. Although Sopoanga is firm in pursuing his goals, he also recognizes that he needs to work on improving the telecommunications industry and electrical links on the islands. Power has been irregular on the islands, and there are occasional blackouts.

Sopoanga has established community fishing centers on each of Tuvalu's islands, in an attempt to improve the cash economies of the islands. The centers buy fish from the islanders and sell it to other islanders, with the remainder going to the capital.

Sopoanga is in favor of Tuvalu becoming a republic. He has said that the change in government would stabilize Tuvalu, because the people and not Parliament would choose the nation's leader. He asserted that Tuvalu would not leave the Commonwealth, however.

In 2002, former prime minister Talake hired two legal firms—one in Australia and one in the United States—to explore the feasibility of taking legal action against the industrialized nations most contributing to the greenhouse emissions and the resulting rise in sea levels. Sopoanga continued this policy, and at the UN's World Summit for Sustainable Development in Johannesburg, South Africa, held in September 2002, Tuvalu attempted to rally other states to join in its plans to take the United States and Australia to the World Court over their greenhouse gas emissions.