Niyazov headed the Industrial Transport Department of the Turkmen Communist Party until December 1980, and then was appointed first secretary of the Ashkhabad City Party Committee. Although Askhabad's industries did not perform well during his tenure, Niyazov was viewed as a competent party boss. In 1984, he became an instructor in the Organizational Party Work Department of the Communist Party, then six months later he became chairman of the Turkmen Council of Ministers. At the end of the year, the relatively young Niyazov was appointed first secretary of the Communist Party of Turkmenistan as part of Gorbachev's efforts to reinvigorate the party elite, fight corruption, and find a scapegoat for economic decline in Turkmenistan. Due to his new post, Niyazov was elected a full member of the Central Committee at the Soviet Communist Party Congress in March 1986.

In addition to his party posts, he became chairman of the Turkmen Supreme Soviet in 1990, following Gorbachev's call for party leaders to head up legislatures. He played a prominent role in the July 1990 Soviet Communist Party Congress, being named to the presidium and presiding at a session. He defended Turkmenistan's caution in implementing Gorbachev's reforms in order to avoid the ethnic and political storms that had occurred in other republics, called for a renewed federation of republics, and for an independent and powerful Turkmen Communist Party. He and all other republic first secretaries were elected ex-officio full members of the Politburo of the Soviet Communist Party, at that time the leading decision-making body of the party.

In early October 1990, the Supreme Soviet changed the Turkmen Constitution to allow a quick popular presidential election, the first such election among the former Soviet republics. Niyazov was overwhelmingly elected, receiving 98.3% of the popular vote, to the newly created post of president of Turkmenistan (relinquishing formal leadership over the Supreme Soviet). He ran unopposed, being unanimously nominated for the post by the Turkmen Supreme Soviet. He remained Communist Party first secretary after winning the election.

In May 1992, Turkmenistan became the first Central Asian republic to enact a post-independence Constitution. It sets up a "secular democracy" embracing a presidential system of rule, granting Niyazov wide powers as head of state and government, though it formally upholds the balance of powers between executive, legislative, and judicial branches. Niyazov issues edicts that have the force of law and appoints and removes judges and local officials. The Constitution includes an impressive list of individual rights and safeguards (though not freedom of the press), but cautions that the 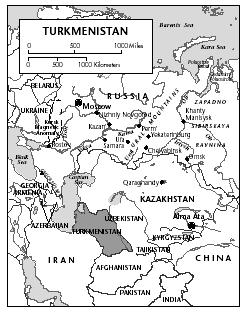 exercise of rights must not violate national morality and public order, nor damage national security.

A democratically-oriented provision calls for the direct popular election of the president, who by law must be an ethnic Turkmen. In line with this provision, a new presidential election was held on 21 June 1992, and Niyazov was elected unopposed, winning 99.95% of the votes cast. In a referendum in January 1994, he received the support of 99.99% of the vote for extending his term until 2002. A change to the Constitution was enacted in late December 1999 naming Niyazov president for life. Most observers viewed the referendum and the life term as serious setbacks to democratization in Turkmenistan.