Tayyip Erdogan was born in 1954 in the city of Rize on Turkey's Black Sea coast. He came from a poor family; his father was a coastal guard, and when Erdogan was 13, his father moved the family to Istanbul so that they might have a better future (he was one of five children.) Erdogan sold lemonade and sesame buns in Istanbul to earn money, and attended an Islamic school. He studied in the Marmara University Faculty of Economics and Commerce, taking a degree in management. While in college, he was a member of the National Turkish Students' Union, and was elected leader of the National Salvation Party's (MSP) Beyoglu Youth Branch in 1976 and the MSP's Istanbul branch leader the same year. While young, he also played professional soccer.

Erdogan went to work for the Istanbul Electricity, Tunnel and Trolley Enterprises (IETT) (Istanbul's transportation authority), but in 1980, when his boss (a retired colonel) 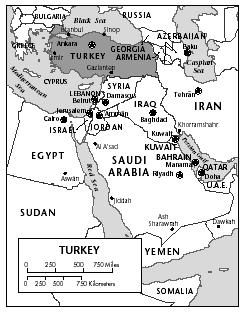 instructed him to shave off his mustache, Erdogan refused and quit his job. He went to work in the private sector and later set up his own business. His mentor was Necmettin Erbakan, who became Turkey's first Islamist prime minister in 1996, but was forced to resign a year later for pursuing an Islamist agenda.

Erdogan is married and has four children. He speaks no foreign languages, a fact which some have seen as a liability when it comes to working in the international arena.