President Zine El Abidine Ben Ali was born on 3 September 1936 in Hammam Sousse. In Tunis, he pursued studies in electrical engineering. Before becoming president he held several state offices, notably that of director of military security (for 16 years), secretary of state for national security, and minister of national security. He received degrees from the French military academy of Saint Cyr and the French artillery school of Chalons sur Marne. He also trained in the U.S. Army's School of Field and Anti-Aircraft Artillery in Texas and, at Fort Holabird, Maryland, where he completed a course on intelligence and military security.

He started his career in 1958 as director of Military Security. After an alleged disagreement with Bourguiba, he was sent in 1974 to Morocco as military attaché, and to Poland in 1980 as ambassador. However, in the wake of the 1983–84 bread riots in Tunisia, he was recalled and made 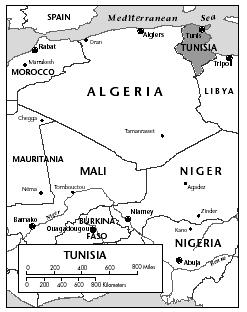 head of National Security. That was the beginning of his very rapid rise to power.

President Ben Ali is married and is the father of five children. His wife, Madame Leila Ben Ali, is active in a number of Tunisian and international charities, working to promote the causes of women, families, and children.