Trinidad and Tobago - Rise to power

Manning then accepted portfolios (maintenance and public service) as a minister of finance. Following the death of the PNM founder and prime minister, Eric Williams, in 1981, Manning held the posts of information minister, minister of industry and commerce, and minister of energy and natural resources, all in the administration of Prime Minister George Chambers, also of the PNM.

Following the 1986 elections, a coalition led by the NAR defeated the PNM and won control of the government; NAR leader Arthur N. R. Robinson became prime minister and Manning left the government to join the leadership of the PNM. Robinson and his coalition-controlled legislature, after promising to privatize the state-owned companies and reduce the country's dependence on oil, implemented austerity measures to try to deliver on those promises. These tactics were unpopular with the citizenry. Radical black Muslims, among the most dissatisfied, staged a coup attempt and took Prime Minister Robinson and other government officials hostage for six days. Although the coup was unsuccessful, it was a reflection—albeit an extreme one—of the citizens' unhappiness with conditions in Trinidad and Tobago. In elections held in 1991, the NAR was ousted from power, the PNM was returned to form the government, and Manning became prime minister. But confronted with the reality of the government budget, Manning and his coalition had no choice but to pick up where the Robinson government had left off in the restructuring of the economy. Thus, the populace became disillusioned with the PNM, too. At the same time, the UNC, part of the former NAR coalition, was trying to broaden its base by incorporating Afro-Trinidadian elements into its primarily Indo-Trinidadian leadership. Demographically, the Indo-Trinidadian population was in the majority in Trinidad and Tobago, and was also somewhat less geographically concentrated than before. A highly mobilized UNC was therefore ready for the polls when an election was called by a too-confident PNM in November 1995. The result was a political stalemate that was brokered by the UNC's former ally, the NAR, which won its two traditional seats in Tobago. After two decades in opposition politics, Indo-Trinidadian Baseo Panday became the first prime minister of East Indian descent. Shortly after assuming power, Panday's government succeeded in bringing two opposition members of Parliament into the UNC coalition, so that Panday no longer needed to rely on the NAR to govern. This in turn led to increased tension between the prime minister, Panday, and the president, NAR leader Arthur Robinson. In December 2000 elections, the UNC retained power when they won 19 seats, while the opposition PNM won 16, and the NAR 1. Panday was sworn-in for a second five-year term as prime minister.

Within the first year of his second term, Panday found himself facing accusations (mostly unproven) of corruption and election fraud that were undermining his ability to lead. On 10 December 2001, the Panday government lost its majority when three cabinet members left the government. New elections were called for, since the UNC no longer controlled the government.

Because party loyalties follow underlying racial divides, the demographics of the society make a dead heat between the Afro-Trinidadian PNM and the Indo-Trinidadian UNC appear inevitable. Following the polling, the UNC and the PNM had each won 18 seats in the 36-seat Parliament. The leaders of the two parties—Panday and Manning—were both prospects for the prime ministership, since neither of the two parties had a majority.

President (and PNM loyalist) Arthur Robinson named Patrick Manning prime minister, a decision that was met with protests and criticism of favoritism from the UNC. Robinson maintained that his decision was based on ethical, not party 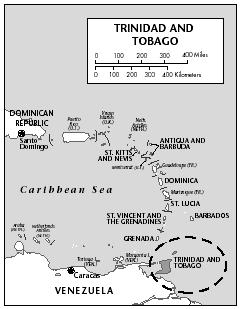 or racial, considerations. Manning was sworn in as prime minister, while Panday said his party refused to accept the decision, accusing Robinson of bias.