The Ewes, a tribe of hunters and farmers, moved into the area which is now Togo from the Niger River Valley between 1100 and 1300. During the fifteenth and sixteenth centuries Portuguese explorers and traders visited the coastal region, which became a major slave-trading center. As European powers struggled to gain control of overseas territories in the late nineteenth century, a German diplomat named Gustav Nachtigal signed a treaty with Chief Mlapa III in 1884 that led to the creation of the German protectorate of Togoland. Following the German defeat in World War I, Britain and France divided the colony, which they held under a League of Nations mandate. The British administered the western portion of Togo as part of its Gold Coast colony, while the French retained the east. The division left the Ewe people divided between two different colonies ruled by different European powers, a legacy which has been a source of political tension ever since. In 1956, the UN supervised a plebiscite in British Togoland. Despite vocal Ewe opposition, a majority in that district supported formal union with the Gold Coast colony, which in 1957 became the independent nation of Ghana. French Togoland achieved its own independence on 27 April 1960.

During the campaign for independence, Sylvanus Olympio, a Ewe nationalist, emerged as Togo's most powerful political leader. On 27 April 1960, in a smooth transition, Togo severed its ties with France, shed its United Nations (UN) trusteeship status, and became a fully independent nation with Olympio as its first elected president. On 13 January 1963, Olympio was killed in a military coup led by a young army officer named Gnassingbe Eyadéma. The military installed a new civilian government with Nicholas Grunitzky as president. In 1967, the military overthrew Grunitzky and installed Colonel Kleber Dadjo as head of state. Within a few months Eyadéma seized power and named himself to the top leadership position. In 1969, Eyadéma's government established a party called the Rassemblement du Peuple Togolais (RPT—Togolese People's Rally), which integrated the military rulers into civilian roles. In 1972, 1980, and 1993, Eyadéma ran for office unopposed.

After seizing power, Eyadéma suspended the Constitution, abolished all opposition parties, dissolved the National Assembly, and permitted only state-run television. At times fierce opposition to Eyadéma's iron-fisted rule was met with a wave of arrests. Many defendants were tried and sentenced to death. Outside observers, particularly Amnesty International, accused the government of torture and murder. Combined with internal pressures, these accusations forced Eyadéma to undertake a series of reforms, including the appointment of a commission on human rights and amnesty to many members of the opposition—including those jailed in the 1986 coup attempt.

In 1990, the RPT met to consider party reforms. A multiparty system was rejected, but a wave of protests and a general strike persuaded Eyadéma to hold a national conference in July 1991 The conferees declared the recommendations emanating from their assembly to be sovereign and drafted an interim Constitution. The conference named a transitional government and elected Kokou Joseph Koffigoh as prime minister. Following an attempt by the transitional legislature to ban the RPT, Eyadéma ordered troops to seize Koffigoh and demanded a "friendly" transitional government. Security forces attempted to assassinate Gilchrist Olympio (son of the slain president) in May of 1992, and succeeded in assassinating Tavio Amorin in July. In October, following the seizure and closing of the interim legislature, Eyadéma declared the transition process over. Another wave of strikes and protests ensued, and on 25 January 1993, security forces fired on peaceful demonstrators in Lomé, killing at least 19. Eyadéma's promise to hold multi-party legislative and presidential elections proved insincere, and under boycott by opposition candidates, Eyadéma ran unopposed and claimed victory on 25 August 1993 with 96% of the vote. In January 1994, Eyadéma survived another coup attempt by Ghana-based dissidents.

In 1998, it appeared that Togo might conduct its first multiparty presidential elections. Six candidates contested the presidency and were permitted to make brief statements on RPT-controlled TV. However, the chief members of the National Electoral Commission, including chairwoman Awa Nana, resigned while returns were being counted, alleging death threats. Eyadéma's internal security minister took over the count and declared Eyadéma to be the victor with 52% of the vote, enough to avoid a run-off with Gilchrist Olympio, who officially garnered 30% of the vote. Riots ensued, and under the pretext of restoring order, police burned the headquarters of Olympio's Comité d'Action pour le Renouveau party. The opposition, led by Olympio's Union des forces de changement (UFC—Union of the Forces of Change), boycotted the March 1999 parliamentary elections where as few as 10% of eligible voters cast ballots, despite government claims of a 66% turnout. The RPT claimed 77 of 81 seats in the National Assembly.

In the first half of 2000, Eyadéma's government fell siege to allegations of sanctions-busting and extra-judicial executions. In March a UN report alleged that Eyadéma and President Compaoré of Burkina Faso sent arms and fuel to Angolan UNITA rebels in exchange for diamonds. In June a UN-OAU commission conducted an inquiry into Amnesty International allegations that Eyadéma's armed forces executed hundreds of people during the run-up to the 1998 presidential election. Amnesty International said political opponents were detained without trial, tortured, and hundreds were executed by security forces both before and after the elections. The group said bodies of victims, some handcuffed, washed ashore on the beaches of Togo and Benin. In February 2001, the commission concluded that systematic violations of human rights after the presidential election of 1998 had indeed taken place.

In April 2002 prospects for reconciliation and a graceful exit for Eyadéma appeared dim. In February, the RPT-dominated legislature unilaterally changed the electoral code, effectively barring Olympio from running for president in 2003, and opening the door for Eyadéma to run again. Eyadéma jailed opposition leader, Yaovi Agboyibo of Comité d'Action pour le Renouveau , who subsequently was released 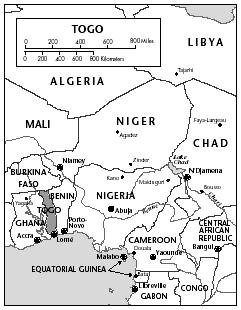 with an eye to appeasing the opposition and to moving forward with the legislative elections. The elections—originally promised for October 2001 and delayed three times, were finally held on 27 October 2002 before the end of the normal term. Despite a high voter turnout, the radical opposition boycotted them. As expected, the RPT won a majority of seats and revised the 1992 constitution to allow Eyadéma to stand for a third term. Olympia has said he will oppose Eyadéma in the June 2003 polls, but he will not meet the residency requirements—changed by parliament—and an appeal before the Eyadéma-controlled judiciary will likely fail. With opposition forces in disarray, an Eyadéma victory is virtually assured.