The defining feature of Dutch foreign policy is the country's membership in the EU. The Netherlands has been part of the EU since the organization's inception as the European Community (EC) in 1958. As a result of the EU's single-market program, completed in 1992, all trade between the Netherlands and the other members of the EU is tariff-free. In addition, a large part of the Netherlands' social, environmental, and financial policy follows guidelines that have been laid out by the EU's secretariat in Brussels. Similarly, relations between the Netherlands and countries outside the EU are strongly influenced by the mechanisms of both the European 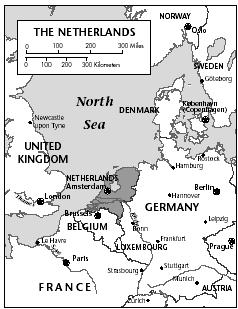 Political Cooperation and the Common Foreign and Security Policy by which EU members endeavor to coordinate their foreign policy positions.

As part of its commitment to the EU, the Netherlands has also pledged itself to the process of European monetary integration, which included the adoption of the euro as official currency in 2002. The first head of the European Central Bank, a new body that is responsible for monetary policy in the euro zone, is Willem Duisenberg of the Netherlands. Dutch support for the European process continued under the Kok government. Kok, himself, is a committed European and was one of the crucial figures behind the 1991 Maastricht Treaty.

In the late 1990s, the Netherlands became more assertive about its contribution to the EU after it has become the second-biggest net contributor. Although the Dutch are unlikely to make this into a major issue, it has made them more cautious about expanding any EU programs or budgetary outlays. The more critical stance of the Netherlands is also a reflection of the prestige enjoyed by Fritz Bolkestein, the former leader of the VVD and current commissioner of internal markets. He is not a great fan of further federalism.

Beyond its membership in the EU, the Netherlands is also a partner in North Atlantic Treaty Organization (NATO) and the Western European Union. It is through NATO and the UN that the Netherlands has historically participated in numerous peacekeeping operations, including the one sent to Yugoslavia.

Balkenende has presided for most of the time over a temporary transitional government. For this reason, he has had hardly any opportunity to make his mark on foreign policy. In the fall of 2002, the Netherlands strongly supported the Bush administration in its efforts to disarm Iraq. In the spring of 2003, however, the Dutch government fell silent, not wishing to jeopardize its relations with other EU member states or the United States, and refrained from commenting on the war against Iraq. Generally, the government pushed for a diplomatic solution and preferred the United States to operate within the framework of UN resolutions and public opinion was opposed to the war. This complicated the position of each party in early 2003, since they were still negotiating—and, after two full months had not reached a coalition agreement. Once the invasion of Iraq began, however, both Labor and CDA announced that they supported the U.S. action and wished for a speedy end to the war with minimal casualties.