From ancient times, what is now Tajikistan has been subject to Persian, Greek, Arabic, Turkic, Mongol, Uzbek, Afghan, and then Russian control. Northern Tajikistan was annexed by the Russian Empire in 1868, while the southern parts remained under the sovereignty of the Uzbek Bukharan Khanate. After the Bolshevik revolution in Russia in 1917, the northern parts of Tajikistan were included in the Turkestan Autonomous Soviet Socialist Republic, while a Communist-run and nominally independent People's Republic of Bukhara was proclaimed in the south, which was eliminated in 1921. In the early 1920s, many Tajiks revolted against Communist rule. These rebels, termed Basmachi (bandits) by the Russians, were finally suppressed in the early 1930s, though with large Tajik casualties. Many Tajiks fled to Afghanistan at that time.

Tajikistan declared its sovereignty over its land and resources on 24 August 1990, and its independence on 9 September 1991. It was among the Central Asian republics least prepared and inclined toward independence. Its Communist-dominated elite, largely composed of members of the Khjoent and Kulyab clans, has endeavored to rebuild traditional ties with Russia. In August 1991, the Communist Party chief fully supported the coup attempt against Soviet leader Mikhail Gorbachev; he was later forced to resign. The Communists continued to rule, however, and supported former Tajik Communist Party chief Rakhmon Nabiyev's popular election as president in November 1991. This election was condemned as fraudulent by groups opposed to continued Communist Party rule, leading to massive demonstrations and an agreement by Nabiyev in May 1992 to form a coalition government. In September 1992, however, opposition forces, largely composed of members of the Pamiri and Garm clans, who had long been excluded from political power and many of whom were supporters of the Islamic Renaissance Party (IRP) or the liberal Democratic Party, 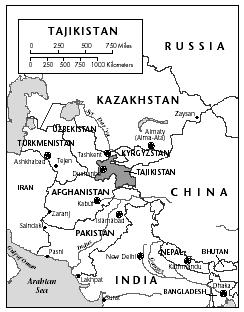 forced Nabiyev from office and tried to consolidate power. Hard-line Communists resisted these efforts. By December 1992, these forces had succeeded in routing the oppositionists from the capital and launched a concerted countrywide offensive, resulting in 20,000–40,000 or more casualties and over 350,000 displaced persons, many of whom fled to Afghanistan. Uzbekistan and Russia contributed arms and troops to assist Tajik procommunists in routing the opposition.

The armed conflict between the two sides continued throughout 1993 and early 1994 with border attacks launched by Tajik rebels based in Afghanistan. At a United Nations-sponsored meeting in Tehran, the Tajik government and opposition emissaries agreed on 17 September 1994 to a ceasefire, to begin when United Nations (UN) observers were in place along the Tajik-Afghan border. The UN Security Council formally established a UN Mission of Observers in Tajikistan (UNMOT) in December 1994, consisting of several dozen observers, to monitor the ceasefire. This committee was later expanded to investigate ceasefire violations, monitor the demobilization of United Tajik Opposition (UTO) fighters, assist ex-combatants to integrate into society, and offer advice for holding elections. A small Organization for Security and Cooperation in Europe (OSCE) mission also promoted peace. In 1993, the Commonwealth of Independent States (CIS) authorized joint Russian and Central Asian peacekeeping in Tajikistan under the auspices of its Collective Peacekeeping Forces (CPF) treaty to protect what Yeltsin termed "CIS borders." CPF consisted of Russia's 201st Rifle Division, based in Tajikistan, and token Kazak, Kyrgyz, and Uzbek troops. In late 1998, Uzbek president Islam Karimov pulled Uzbek peacekeepers out of Tajikistan to protest charges made by President Imomali Rakhmonov that Uzbekistan had fostered an insurrection there. Kyrgyzstan pulled out as well, citing costs. Russian media reported in late 1999 that there were about 20,000 CPF, border, and other Russian troops in Tajikistan. In August 1999 the commander of the CPF troops stated that the role of his forces had largely shifted to the delivery of humanitarian cargo, clearing mines, and giving medical assistance. Nonetheless, plans to withdraw the CPF have not been announced, perhaps because in April 1999, Russia and Tajikistan signed a basing agreement for the 25-year presence of Russian troops.

In December 1996, the two sides agreed to set up the National Reconciliation Commission (NRC), an executive body composed equally of government and opposition emissaries. In June 1997, Rakhmonov and UTO leader Seyed Abdullo Nuri signed the Comprehensive Peace Agreement. Under this accord, Rakhmanov remained president, but 30% of ministerial posts were allocated to the opposition with, Nuri heading the NRC. Benchmarks of the peace process have largely been met, including the return of refugees, demilitarization of rebel forces, legalization of rebel parties, and the holding of presidential and legislative elections. Stability in Tajikistan remains fragile, however. An unsuccessful insurrection in the Leninabad region of northern Tajikistan launched by notorious warlord Mahmud Khudoyberdiyev in November 1998 highlighted concerns by some observers about secessionist tendencies in the region and about ethnic tensions between ethnic Tajiks and Uzbeks in Tajikistan.

Part of the peace process was the scheduling of elections for 6 November 1999. The Central Electoral Commissions (CEC), controlled by Imomali Rakhmonov, declared him the only candidate and opposition members of the NRC resigned. In March 2000 the NRC was dissolved and legislative elections were held. Two months later, UN observers left the country, praising the work of the NRC and the progress toward stabilization that had been achieved.