Chen Shui-bian was born in Tainan county (southern Taiwan) some time in the ninth month of the lunar calendar in 1950. He was so weak as a newborn, however, that his parents, poor tenant farmers, did not register his birth until 18 February 1951. Throughout his elementary and secondary education years, Chen was normally at the top of his class despite gripping poverty reflected by life in a mud hut. He attended the prestigious National Taiwan University, graduated with a bachelor's degree in law in 1974 and won the Outstanding Performance Award for Academic Achievement. In 1973, he passed the Examination, Yuan's legal qualification test as a top performer. In 1976, he began a 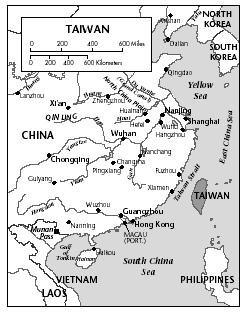 successful legal career practicing maritime law with the Formosa International Marine and Commercial Law Office. Shortly thereafter, he married Wu Shu-jen, the daughter of a wealthy doctor. They have a son and a daughter.

In 1980, Chen became the defense attorney for two dissident leaders and publishers of the Formosa Magazine , who were charged with sedition in what came to be known as the Formosa Incident. That violent protest in Kaohsiung left 140 police injured and 50 people jailed for inciting civil disorder. He lost the case, but became convinced that political activism was necessary to reform the authoritarian political system. One defendant, Annette Lu, served five years in prison for sedition. Lu became Chen's vice-presidential running mate and upon Chen's victory, the first female Taiwanese vice-president.

Chen remained active in legal circles throughout the 1980s, but also became active in politics. In 1981, he was elected member of the Taipei City council. His antigovernment stance gained him a reputation as a populist and anti-KMT politician. The KMT government sought to contain his growing influence. In 1985, he was sentenced to a one-year prison term for libel resulting from his article in Formosa Magazine , which accused a progovernment university professor of perjury. He served eight months in prison. During his incarceration, his wife was elected to the national assembly at a heavy cost. A truck struck his wife in what Chen claimed was an assassination attempt by KMT thugs. Wu's spine was shattered in 30 places and resulted in paralysis below the waist and confinement to a wheelchair. As a result, Chen became even more determined to support the weak, challenge unfairness and ensure social justice. In 1998, he wrote an autobiography, Son of Taiwan . Chen's hobbies include membership in the Rotary Club and Western movies.