Ronald Venetiaan, who served a term as Suriname's president from 1991 to 1996, took office for a second time on 12 August 2000 pledging to improve the economy. He had been involved in Suriname politics for almost 30 years. Venetiaan became the minister of education in the pre-independence Suriname government in 1973, and remained in the post when Suriname gained its independence in 1975. In 1980, when the government was overthrown in a military coup led by Désiré Bouterse, Venetiaan (and all the other ministers) gave up their posts. When the military allowed elections to be held in 1987, Ramsewak Shankar became president and Venetiaan joined his cabinet, again as minister of education. The government functioned until 1990, when the military again assumed power. Venetiaan formed a coalition, the New Front (NF), to oppose the military control of the government. The NF coalition was made up of four political parties: the NPS, the Hindu Progressive Reform Party (VHP), the Suriname Labor Party (SPA), and the Javan party, Pertjaja Luhur. Under international pressure, the military government again agreed to hold elections in May 1991, and the Venetiaan's NF swept to power; Venetiaan was selected to become president in September 1991. Bouterse and his fellow military leaders were fired by Venetiaan, but Bouterse remained a powerful political leader as president of the National Democratic Party (NDP). The government, led by Venetiaan and his vice president, Jules Rattankoemar Ajodhia, managed to implement a plan to restructure the economy. They led the country until the general election on 23 May 1996, when President Venetiaan's New Front coalition initially appeared to have narrowly won the National Assembly. When the votes were tallied, the NDP, led by Jules Wijdenbosch (and with Bouterse behind the scenes) won only 16 of the 51 National Assembly seats, but it subsequently increased its strength to 28 when the New Front coalition disintegrated. Members of the VHP and the Indonesian party, KTPI, defected, joining a new coalition with the NDP, giving the election to Wijdenbosch and the NDP. Wijdenbosch won 437 votes of the United Peoples' Assembly against 407 for Venetiaan, an outspoken defender of democracy over military government. While Bouterse was still a powerful force in the NDP, the new recruits to the NDP-led coalition stipulated that Bouterse should not hold office in the new government. Wijdenbosch's close association with Bouterse, a former dictator, reawakened fears of a 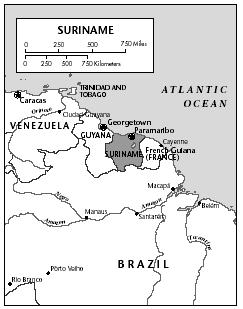 resurgence of the bloody civil war of the 1980s. These worries grew and the country's economic woes worsened. These factors combined to result in Wijdenbosch's defeat by Venetiaan in the elections held in 2000, when the NF coalition won back control of the government. Ironically, one of the unlikely—but successful—candidates in the May 2000 elections for the National Assembly was Bouterse, whose popularity in Suriname seemed unaffected by the fact that he was found guilty of cocaine trafficking by the Dutch government.