Bashir, who has said that he had considered taking power ever since Suwar al Dahab returned Sudan to democracy in 1986, reportedly arrived in Khartoum only three weeks before the 1989 coup. Prime Minister Sadiq al Mahdi's inability to end the civil war or to rehabilitate Sudan's crippled economy led to months of growing confrontation and animosity between the military and the government. In February a group of military officers presented Prime Minister Mahdi with an ultimatum, demanding that he either settle the civil war through negotiation or give the military the means to gain victory on the battlefield. Bashir is said to have been involved in the planning of a coup attempt set for 22 June 1989, though he was not among those arrested in an 18 June preemptive roundup of conspirators.

On 30 June, a group of military officers, dissatisfied with Sadiq al Mahdi's progress in ending the war and solving Sudan's endemic food crisis, moved to arrest the prime 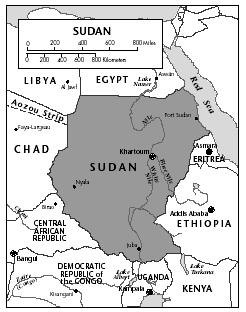 minister and dismissed 28 generals loyal to his government. The coup was for the most part bloodless, as it was reported that only two officers were killed in the takeover. The little-known Bashir soon announced on the official Omdurman radio that he was the leader of this coup and that henceforth Sudan would be ruled by a new Revolutionary Command Council of National Salvation. He further announced that the junta's primary goals would be achieving peace and putting the shariah issue to the people in the form of a referendum.