Prime Minister Anthony and the SLP have formulated policies aimed at increasing tourism through more intense marketing and the transformation of St. Lucia's image by measures such as the development of more ecotourism and heritage sites. Their plans seemed to have worked. In 1999, 50% more tourists visited the island than in 1996, including 261,000 stayover tourists and 423,000 cruise ship visitors. The development of the tourism sector has been helped by the government's commitment to providing a favorable investment environment. Incentives are available for building and upgrading tourism facilities. There has been liberal use of public funds to improve the physical infrastructure of the 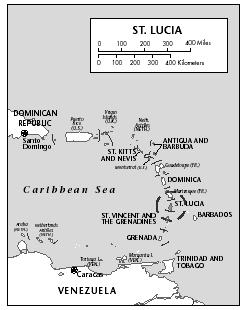 island, and the government has made efforts to attract cultural and sporting events and develop historical sites. Though the September 2001 terrorist attacks on the World Trade Center and the Pentagon in the United States caused a global drop in air travel and tourism, U.S. and European airlines continued to add flights to St. Lucia. This has given Anthony added confidence that the island will reach its goal of raising St. Lucia's share of Caribbean tourism from its 1997 level of 1.3% to 5% by 2003. In 2003, with the "Refundable Containers Act" Anthony and his government aimed to further clean up the beaches of St. Lucia by removing unsightly used soda cans to attract more tourists.

The Anthony government has interwoven the expansion of the tourism industry with its goal of increasing employment. Anthony also aims to create more public-sector jobs while implementing skills training, apprenticeship, and skills registration programs. In 1996, the unemployment rate stood at 29%. The major factors that contributed to this situation include lack of appropriate education, training, and capital. By 1999, unemployment had been reduced to 18%. In his 2000–01 budget statement, Anthony outlined the additional employment strategies of stimulating the tourism and construction sectors, creation of more opportunities for self-employment, and diversifying the agricultural sector.

His government has recognized the importance of absorbing the debt of the St. Lucia Banana Growers Association and restoring the banana industry to its former status. In the 1960s, 80% of export earnings came from banana exports to the United Kingdom. Following years of dispute with the United States, however, the European Union (EU) has announced a phase-out of preferred access to its markets by 2006. This means that the government needs to make agricultural diversification a priority. An attempt is being made to diversify production by encouraging the establishment of tree crops such as mangos and avocados. A variety of vegetables are also produced for local consumption. Tax incentives have been introduced to encourage the development of nontraditional crops.

In 1999, the Anthony administration began working toward redesigning and reintroducing strong local government to the island. The efforts are aimed toward decentralizing the government and empowering citizens for greater public participation in government. In April 2002, a series of community meetings were held to select persons to assist in establishing election procedures for local government councils. The Anthony government announced in 2003 that it would make child health care a priority, with a focus on preventing the spread of the AIDS virus to children. The government also took on a revision of the Labour Code, intended to improve industrial relations on the island.