Denzil Douglas is only the second prime minister of St. Kitts-Nevis. His predecessor was elected in 1983 when the country became independent and had been prime minister until the July 1995 elections, which took place almost three years before they were required by the Constitution. The elections were held early, as many believed they would be, due to the political fallout from the previous elections in November 1993. At that time, PAM won only four seats, with 41% of the popular vote. The SKNLP also won four seats, yet it had won a greater percentage of the popular vote, 54%.

However, Simmonds joined forces with the NRP, which controlled one seat, and formed a majority in the National Assembly. The SKNLP's supporters responded with violent street demonstrations, arguing that the government had no legitimacy. The authorities promptly imposed a curfew and state of emergency, something which has left a continual state of tension in the political landscape.

In September 1994, cocaine worth millions of dollars was found buried in the sand by a fisherman searching for turtle eggs. Shortly thereafter, two sons of the deputy prime minister, Sydney Morris, were accused of conspiring to sell cocaine and possessing weapons. A third son disappeared. Such serious charges would normally be enough to keep the suspects behind bars, but the two were released on bail. Their release prompted not only charges of corruption to be hurled at the government, but a riot at the prison by 150 inmates. The rioters set fire to the prison and many escaped, forcing the government to call for help from the regional security and police forces to restore order and capture the escapees. In the wake of this, the deputy prime minister resigned.

This incident, which occurred after a number of unsolved crimes, reflected the sense among many in the country that St. Kitts-Nevis was coming to play an increasing role in the international drug trade. The crisis that it prompted led to the formation in November 1994 of a "forum for national unity," attended by the four political parties, the Chamber of Industry and Commerce, church organizations, the Hotel and Tourism Association, the St. Kitts-Nevis Trades and Labour Union, and the Bar Association. All parties agreed that the increase in drug-related crime was creating adverse publicity and eroding the confidence of local and foreign investors. The forum called for immediate action to strengthen security and agreed to hold elections within one year.

Prime Minister Simmonds further embarrassed the government when he appointed Sydney Morris as an advisor to the ministry of education only one month after Morris had resigned in the wake of scandal. Douglas, leader of the opposition at the time, called for the prime minister to resign, claiming that Simmonds made a "callous and insensitive" decision in appointing Morris to a post that was tantamount to making him junior education minister.

The cumulative effect of political scandal, rising drug crime, and the 12-year hold on power left the Simmonds 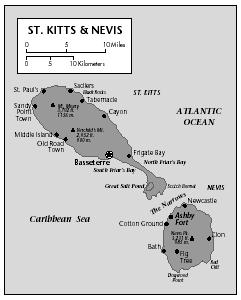 government open to attack and criticism. When the elections were held on 3 July 1995, Douglas, who had spent six years in the opposition as leader of the SKNLP, swept into office in a landslide victory. His party captured seven of 11 seats, ousting Prime Minister Simmonds not only from his position as head of government, but also from his seat in the Federal Parliament. Douglas became prime minister on 4 July, the following day.