On 4 February 1948, Sri Lanka obtained independence from the United Kingdom (UK), which had colonized it in 1815. Established as a parliamentary system within the Commonwealth, the country became a republic in May 1972 and, in fall 1978, switched to a presidential-parliamentary system. This largely unitary system is akin to the French presidential system and concentrates power in the president, who is limited to two six-year terms. The president appoints and dismisses the prime minister and other ministers and can also dissolve Parliament. The unicameral legislature is composed of 225 members who are elected by proportional representation for six-year terms. The Supreme Court judges are appointed by the president, and the Court has sole jurisdiction over constitutional issues.

Several parties are active in Sri Lankan politics, but the two most important ones are the United National Party (UNP) and the Sri Lankan Freedom Party (SLFP). The UNP is a moderate, liberal, and generally pro-Western party, while the SLFP, which is currently in power, is a more leftistoriented party. Two of the more prominent groups implicated in guerrilla attacks against the government are the Janatha Vimukhti Peramuna (JVP—People's Liberation Front), with a militant Sinhalese ideology, and the Liberation Tigers of Tamil Eelam (LTTE, commonly called the Tamil Tigers), which is the leading force in the fight for a Tamil homeland in Sri Lanka. Large-scale repression and the death of top JVP figures, allegedly at the hand of security forces in late 1990, reduced the organization's effectiveness, but by early 2000 the JVP had re-emerged as a political force on the island.

The ethnic conflict in Sri Lanka has been simmering for decades. Government policy in the 1950s aimed at enhancing the political and social status of Sinhalese and embittered the Tamils. While there was some violence during the 1970s, the conflict escalated into a civil war in the 1980s, sending many Tamil refugees to Tamil Nadu in India. Indian attempts at mediation between the LTTE and the Sri Lankan government in the mid-1980s were ineffectual. Fighting between the Tamil Tigers and Sri Lankan forces have continued, although the former have suffered severe losses with the withdrawal of Indian support, weakening of support from the Tamil population and increasing success of the Sri Lankan Army attacks. But the Tigers continued to demonstrate their power. In May 1991 they were implicated in the assassination of India's Rajiv Gandhi, and, according to the Sri Lankan government, the Tigers are the likely suspects in the 1 May 1993, assassination of President Ranasinghe Premadasa and the October 1994 assassination of Gamini Dissanayake, the UNP's candidate for the Sri Lankan presidency. The latter was perceived as being a hard-line anti-Tamil politician. Chandrika Kumaratunga's main priority, in her two terms of executive leadership, has been to find a solution to the LTTE insurgency. 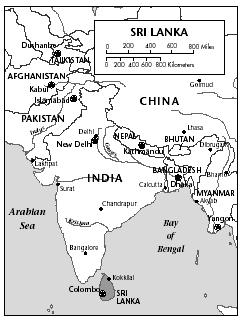