José María Aznar was first elected to the Spanish Parliament in 1982, after which his rise to prominence within the Popular Alliance was rapid. In the mid-1980s, he served as chief minister of the Castile-Léon region. He also led a faction within the party which advocated a shift toward the political center and a break with Franco's remaining adherents. In 1989 Aznar was elected leader of the Popular Alliance, which was then renamed the Popular Party (PP). Throughout the early 1990s Aznar continued to steer the party toward the center, avoided ties to groups on the extreme right, advocated conservative fiscal and economic policies, and made a concerted effort to recruit women and young people into the party.

In the first elections contested under Aznar's leadership in 1989, the PP lost by a wide margin to the PSOE. Nevertheless, Aznar was credited with having refashioned the PP into a "clean" party of the right—devoid of fascist and 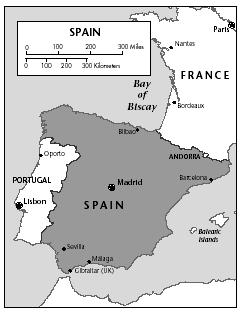 extreme elements devoted to Franco. The 1993 general election, although still won by the PSOE, brought the PP within a narrow margin of capturing a majority of seats in the Cortes . The continuing scandals within the PSOE allowed Aznar to capitalize on the PP's recent electoral strength by making ethics an issue.

Continued erosion of support for the PSOE, coupled with the widening inquiry into corruption at the top levels of the party forced Prime Minister Felipe González Márquez to call early elections for 3 March 1996. As the principal opposition party, the PP was expected to gain an outright majority in the March elections, with no need for coalitions with regional parties. Despite commanding leads in all the polls, when the vote was counted Aznar and the PP had won only 156 seats in the Congress of Deputies—20 seats short of the majority needed to form a government. In fact, with only 38.8% of the 25 million votes cast, the PP garnered only 1.4% more than González and the PSOE.

To rule, Aznar was forced to forge a coalition with the Catalan Convergence and Union (CiU) party, which was led by Jordi Pujol, a powerful political figure. Aznar had counted on an outright victory and had attacked the Catalan party during the campaign. Yet Pujol was willing to forget, in exchange for concessions and political power. For the next four years, Aznar's party ruled with CiU on its side.

In March 2000, Aznar and the PP were expected to barely win against a leftist coalition intent on gaining power back. The PSOE aligned itself with the United Left (IU), but voters were disillusioned with continued political scandals and accusations of corruption that had shocked the left. In 1999, the PSOE's presidential candidate, the popular Jose Borrell, was forced to resign when two of his underlings were charged with allegations of wrongdoing. The PSOE then settled on Joaquín Almunia to lead the party. By all accounts, the campaign for the March 2000 elections lacked drama or major ideological differences. Aznar, Almunia, and other candidates were left to exchange personal insults. Aznar was especially hard on Basque separatist nationalists, an easy position to take since most Spaniards were tired of Basque Fatherland and Liberty (ETA) terrorist attacks. What really worked in favor of Aznar was the thriving Spanish economy. Under Aznar, the economy was one of the fastest growing in Europe. The liberalization of the economy had been one of Aznar's major goals in 1996, and many of his policy decisions had worked. By 1999, the economy was growing at more than 3% per year, and unemployment had decreased from about 24% when he took power, to about 15% by late 1999. Faced with those numbers, the left didn't have much to offer, except to accuse Aznar of being too far to the right. Aznar would not concede much in ideology, however. During the latter part of his presidency, he continued to claim a more centrist position, talking both about family values and creating more jobs.

Since 1996, Aznar had grown in confidence if not in style. Still considered a bland orator with a serious lack of charisma, Aznar had become an able politician who had managed to maintain the fragile alliance with Pujol and the CiU. As more European countries leaned to the left in the late 1990s, the successful economic policies of Aznar became powerful symbols for conservative leadership. By 2000 elections, Aznar was seeking a majority so he would not have to negotiate with Pujol or any other party as he sought further economic reforms. What happened at the polls caught even Aznar by surprise. The PP captured 44.5% of the vote and increased its seats in the Congress of Deputies from 156 to 183, a majority. The PSOE lost 16 seats (from 141) and the United Left lost 13 (from 21). The CiU held on to 15 seats, but lost its political leverage since the PP no longer needed anyone to form a government.