The modern state of Sierra Leone has its origin in the settlement at Freetown of some 400 free blacks from England in 1787. This group was joined in the 1790s by free blacks from Nova Scotia and Jamaica. With backing from prominent British Abolitionists, the settlement grew and became a British colony in 1808. Over the next four decades, the original settlers were joined by some 40,000 "recaptives"—the cargo of slave ships intercepted by the British Anti-Slaving Squadron in operation along the West African coast. Thus, from its earliest years, Sierra Leone was one of the world's great cultural melting pots. The "Creoles," as the settlers came to be known, drew upon their knowledge of West Africa, Europe, and the New World to become influential merchants in the "legitimate" trade that developed in the period after the slave trade. Creole missionaries were instrumental in the spread of Christianity throughout West Africa. During the 19th century, Sierra Leone developed into one of the region's intellectual centers. Newspapers printed in Freetown were read throughout West Africa. The Foura Bay Teacher Training College was established in 1827, and in 1876 achieved University College status.

In 1896, the British declared the interior to the north and east of Freetown to be a British protectorate. The Creole population continued to play an influential role in the affairs and civil service of the colony up to the end of World War II. In 1951 a new unitary Constitution, which granted universal adult suffrage, politically empowered the region's indigenous ethnic groups. Elections in 1953 and 1958 saw victory for the largely Mende-backed Sierra Leone Peoples Party (SLPP), with the party's leader, Milton Margai holding the positions of chief minister and prime minister, respectively. On 27 April 1961, Sierra Leone was granted independence within the British Commonwealth, with the SLPP still in power. In 1967, the All-Peoples Congress (APC), under the leadership of Siaka Stevens, succeeded in defeating the SLPP at the polls. A military coup prevented the APC from taking immediate control of the government. Within a year, however, a counter-coup displaced the military government and placed Stevens and the APC in power.

The 1970s were a decade of declining national revenues and growing corruption within the government. Stevens' regime survived a coup attempt in 1971 and in June of 1978 re-wrote the Constitution to accommodate a new system of one-party rule under the APC. The early 1980s saw continuing economic decline and growing political strife, with violent clashes with workers and students becoming commonplace. In 1985, Stevens retired and Joseph Saidu Momoh (who was then a cabinet minister and head of the armed forces) was nominated as the sole candidate for president. Running uncontested, he received 99% of the vote. Momoh's acceptance of IMF austerity programs did little to improve the country's economic situation and caused considerable hardship among the poor. Momoh launched several highly-publicized anti-corruption campaigns, but these were 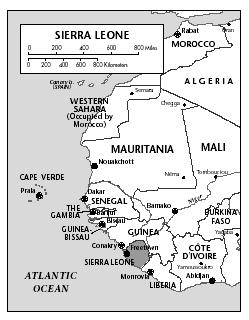 frequently derided as no more than opportunities to purge his political opponents from the civil service.

In 1992, the Momoh government was overthrown by a group of junior officers. These men had been serving in combat against the Revolutionary United Front (RUF) in the country's southeast, near the Liberian border. They established the National Provisional Ruling Council and chose the 25-year-old Valentine Strasser as head of state. The NPRC vowed that they would bring a quick end to the civil war that had begun the year before and would return the country to civilian rule as soon as possible. Over the next four years, Strasser survived numerous coup attempts. Though the NPRC was unsuccessful in bringing an end to the insurgency of the RUF, the Strasser government did take concrete steps towards elections that would hand over power to a civilian government. In 1996, Strasser was overthrown in a bloodless coup. He was succeeded by his second-in-command, Julius Maada Bio.

Many observers feared that Bio's coup would mean an end to the transition to civilian rule. Nonetheless, in less than three months, Bio oversaw parliamentary and presidential elections. The presidential contest included a run-off election between the presidential front-runners, Tejan Kabbah of the Sierra Leone People's Party (SLPP) and Karefa-Smart of the United National People's Party (UNPP). The final results saw Kabbah and the SLPP win by a commanding three to two margin; Kabbah took power on 29 March 1996. When dissident officers seized power in May 1997, Kabbah was forced to seek refuge in Guinea where he and senior officials stayed until they could be returned to power in February 1998. The civil war continued, however, until ECOMOG, and British and UN troops under UNAMSIL all but defeated the RUF and other armed groups, and achieved a negotiated ceasefire and peace agreement, fully effective in January 2002. President Kabbah and his party won overwhelming victories at the presidential and parliamentary polls that followed on 14 May 2002.

The history is true and everyone has hope that one day our mother land will regain glory.