After World War I the Serbian kingdom joined with the kingdom of Montenegro and the Austro-Hungarian lands inhabited by Slovenes, Croats, Slavic Muslims and Serbs. A new state of South Slavs (Yugoslavia) was formed, ruled by an authoritarian Serbian king and dominated by Serbia. When World War II broke out, the Axis powers dismembered Yugoslavia. Much of the territory of Serbia and Montenegro was divided among neighboring German allies.

Following World War II, with the victory of Josip Broz Tito's Communist partisans over the Germans and the local forces loyal to the Serbian king, a new country was formed, with six constituent republics. Tito became the nation's president in 1953 and had himself declared president for life under a revised Constitution ten years later. After Tito's death in 1980, Yugoslavia adopted a rotating presidency to defuse tensions between its multiple ethnic groups, but these tensions ultimately resulted in the breakup of the country and declarations of independence by the constituent republics of Croatia, Slovenia, Macedonia, and Bosnia and Herzegovina, leaving a "rump Yugoslavia" composed solely of Serbia and Montenegro. In 1992 these two republics proclaimed a new Federal Republic of Yugoslavia.

Hostilities in the region continued into the 1990s. In October 1995, peace talks sponsored by the U.S. government and held in Dayton, Ohio, resulted in the Dayton peace accord, signed by the presidents of Serbia, Croatia, and Bosnia. The terms called for an end to the fighting in Bosnia, and the installation of 60,000 United Nations (UN) peace-keeping troops. But the accord did not bring peace, and sporadic fighting continued throughout the region. The major flare-up in the succeeding years was the Kosovo crisis of 1998–99, resulting from the persecution and forced expulsion of the majority Albanian population in the province of Kosovo triggered international intervention, with intensive bombing of Serbia by North Atlantic Treaty Organization (NATO) forces in the spring of 1999. After 78 days of bombing, the Yugoslav generals signed an agreement with the NATO generals for the withdrawal of Serbian troops from Kosovo. Peacekeeping forces from NATO remained in Kosovo as of 2003. Meanwhile, the International War Crimes Tribunal of the United Nations, based in The Hague, Netherlands, brought charges against Serb generals and Bosnian leaders involved in atrocities against Albanians in Kosovo. Yugoslav president Slobodan Miloševic was indicted for his role in the Kosovo atrocities in 1999; other indictments later included war crimes carried out in Bosnia and Herzegovina from 1992–95. He called for presidential elections early, in October 2000; in balloting that was followed by charges of manipulation by Miloševic's camp and massive public demonstrations, Vojislav Koštunica won the presidency. Miloševic's trial in The Hague began in February 2002.

In March 2002, the Republic of Serbia and the Republic of Montenegro consigned the Federal Republic of Yugoslavia to history and created the loose federation "Serbia and Montenegro" on 4 February 2003. Both republics share defense and foreign policies, but maintain separate economies, currencies (the dinar for Serbia and the euro for Montenegro), and customs services for the immediate future. Each republic has its own president and parliament, with a central 126-member Parliament located in Belgrade (Serbia sends 91 members to Parliament, and Montenegro sends 35). The president of the union is elected by Parliament for a four-year term, and nominates members of the Council of Ministers. The president also appoints the prime minister. The Constitution of Serbia and Montenegro allows each of the two republics to hold independence referendums in 2006. 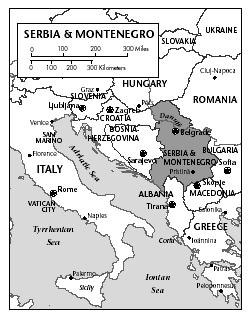 On 7 March 2003, Svetozar Marovic was elected the first president of Serbia and Montenegro.

Also read article about Serbia and Montenegro from Wikipedia