Abdoulaye Wade was born on 29 May 1926 in the town of Kebemer. He did his primary schooling in Kebemer and Saint Louis, followed by middle school in Sebikotane at William Ponty, and high school at Van Vollenhoven in Dakar. He received a scholarship to study elementary and advanced math at Lycée Condorcet (High School) in Paris. After his college studies at Besançon, France, he earned his doctorate in law and economics. It was in Besançon that Wade met Viviane Vert, a student of philosophy. Both were involved in 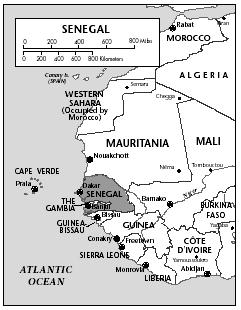 student union organization in 1952. They married several years later and have a son, Karim, and a daughter, Sindjeli.

Wade worked as a barrister for a few years in Besançon before returning to Senegal where he opened his own law firm and began teaching courses at the University of Dakar. He became a permanent faculty member in the law school and department of economics, and later served as dean of the law school. His many professional activities include his econometrics research at Boston University, lecturing in the faculties of law and economics at Paris II, and consulting for the OAU and the African Development Bank. He is a member of the Stockholm-based International Academy of Comparative Law. Wade has been awarded the French Legion of Honor.

Wade's love of soccer was rewarded in February 2002 when Senegal came in second in the Africa Nations Cup, losing to Cameroon in the championship game in Bamako. In his younger days, he enjoyed riding horseback, and in his student years collected classical, jazz, and blues music. He played the violin and guitar at William Ponty and Sebikotane. His favorite poet is Clement Marot, a French author from the middle ages, and among his favorite books is Benoist-Mechin's biography of the Emperor Julian. Wade is fluent in Wolof, French, and English.