In 1983 Ugandan President Obote expelled 40,000 Rwandan refugees from Uganda because of their support for rebels intent on overthrowing his regime. Some estimates put the number of Rwandans killed in the fighting with Obote at 10,000. Outraged by the injustice of the Obote government, Paul Kagame left Makerere University to join the rebels in the bush.

When the RPF first invaded Rwanda in 1990, Paul Kagame was taking further military training in the United States. His fellow officers who initially led the invasion—namely Major-General Fred Rwigyema, Major Dr. Peter Baingana, and Major Chris Bunyenyezi—were killed in the first week. Kagame returned from the United States to take over the reigns of RPF, which he found demoralized and in disarray. Kagame quickly reorganized the RPF and introduced some ethnic balance by including as many Hutus as possible. In response to the massacres that spread across Rwanda in April 1994, the RPF launched a major offensive 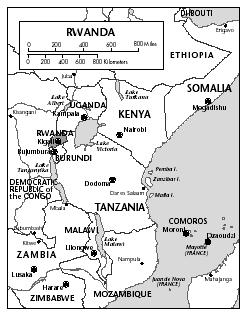 and quickly captured much of northern and eastern Rwanda and over a period of three months, gradually gained control of most of the rest of Rwanda. When they marched into Kigali, they found the city littered with hundreds of corpses— victims of the three-month-long barbaric Rwandan genocide.

By July 1994, the remnants of the Habyarimana regime, along with hundreds of thousands of Hutu civilians, fearing retribution for the massacres, fled before the advance of the RPF troops, creating one of the largest movements of refugees in modern world history. Approximately two million people fled Rwanda, half to Tanzania and half to the Democratic Republic of the Congo; another two million became internal refugees. With the capture of the city of Gisenyi on 17 July 1994, the RPF controlled all of Rwanda except for a small area in the southwest that was controlled by French troops. The victorious RPF then set about establishing a new government.

Military victory, however, did not guarantee the RPF's ability to rule the country. The Rwandan population perceived the RPF to be a Tutsi movement because the top military commanders and the majority of soldiers were Tutsi. To gain legitimacy and attract the predominantly Hutu refugees back into the country, the RPF needed to present itself as a multi-ethnic coalition. Thus, the RPF struck an accord with the opposition parties that had served in the 1992 multi-party government. As one of the senior Hutu in the RPF, Pasteur Bizimungu was named president for a five-year term on 17 July 1994. Faustin Twagiramungu, another Hutu from the MDR and the man designated to become head of government in the peace accords of August 1993, was named prime minister. Despite formally holding the highest state office in Rwanda, Bizimungu's power is thought to have been relatively limited. Due to the fact that he left the country before the outbreak of the war and joined the Tutsidominated RPF, many Hutu did not trust Bizimungu, particularly in his home region of the north, where Habyarimana was popular and, alternatively, the RPF was hated. In the new government named on 19 July 1994, Major-General Paul Kagame, the head of the RPF, became vice president and minister of defense. Kagame was widely perceived to be the "power behind the throne," because of his control of the military. Together, Bizimungu and Major-General Kagame ruled the country, with the latter seen as the real wielder of power.

On 23 March 2000, President Pasteur Bizimungu resigned as president after accusing the Tutsi-controlled Parliament and cabinet ministers of unfairly investigating his allies on corruption charges. Kagame, Bizimungu's vice president and the rebel leader who propelled the mostly Tutsi RPF to victory in 1994 and ended the country's genocide, was overwhelmingly elected president on 17 April 2000 during a special joint session of Parliament and the cabinet. Upon his inauguration on 22 April 2000, Kagame became the country's first Tutsi president since independence from Belgium in 1962. He was still in office in 2003, as the transitional period drew to an end.

Early in 2003, President Kagame stated that he was not certain whether he would be a candidate for president in the presidential elections scheduled for July 2003. Many political analysts assumed he would run with a good chance of success, as political parties were banned from holding rallies or organizing at the grassroots level during the transitional period, and the main opposition party in the government of national unity, the Mouvement Democratique Republicain (MDR) was experiencing divisive leadership struggles. The Rwandan government accused some foreign governments of aiding the opposition parties, notably the MDR and ex-president Bizimungu's unregistered Party for Democracy and Regeneration-Ubuyanja.