Russian history dates from the late 9th century AD. The earliest Russian state, known as Kievan Rus, had its capital for the most part in Kiev (in present day Ukraine). The ruling dynasty came from Scandinavia and had cultural and commercial ties to northern Europe. Christianity came to Russia in the late 10th century via Constantinople, bringing Russia spiritually into the orbit of Byzantium. Kievan Rus was overrun and destroyed by the Mongols in the mid-13th century. The modern Russian state emerged from the territory around Moscow during the later part of the Mongol domination (late 14th through 15th centuries). As Mongol power declined, Muscovy grew, absorbing large parts of the Mongol Empire and most of the lands of old Kievan Rus. But two-and-a-half centuries of Mongol domination had cut Russia off from Europe at a critical time, leaving a legacy of oriental despotism in Russia while northern, central, and western Europe experienced the Renaissance and Reformation instead. Thus, when Russia "rejoined" Europe in the 16th century, there was a big developmental gap between them. With no natural boundaries in the east or west, Russia continued to expand through the Eurasian corridor, absorbing lands populated by non-Russian peoples. During this empire-building, Russia often felt itself under pressure from surrounding states that were more highly developed, as well as from the harsh northern climate. The Russian Empire became a highly militarized state whose activities were often dominated by the requirements of national defense and human subsistence.

The Tsarist Russian Empire, fatally weakened by defeats during World War I, was overthrown in 1917. A provisional government was set up, which aimed to create a modern republic but it was swept away by Communists led by Vladimir Lenin, leading to several years of civil war. The victorious Communists proclaimed the Soviet Union in 1922, comprising most, but not all, of the previous Russian Empire. It was organized into ethnically based Soviet Socialist Republics, of which there were eventually 15. The Russian Republic was bigger and more populous than all the others combined. Russians also dominated the republics on the periphery even while they were all subject to the authoritarian control of a government that was federal in form but became highly centralized in function under Stalin, who ruled from 1924–1953.

After the Soviet victory in World War II, the Russians and other Soviet peoples hoped for a relaxation of authoritarianism, but Stalin launched new repressions against soldiers and others who had contacts with the West during the war and established an "iron curtain" against further Western contacts. At the time of his death, he appeared to be launching new wide-scale repressions against Soviet Jews and others. Khrushchev's partial reforms (1954–1964) were mostly reversed by Brezhnev (1964–1982) and his two short-term successors. Major change came when Mikhail Gorbachev became the Soviet leader in 1985. By that time, the Soviet economy had run out of steam, hampered by a highly centralized command system that proved increasingly inefficient and unable to cope with the requirements of postindustrial development. Economic growth stagnated and began to decline, belying Khrushchev's famous goal of soon "overtaking" and "burying" (outlasting) the capitalist West.

Gorbachev launched a series of reforms intended to reverse this downward trend and revive the Soviet system. His 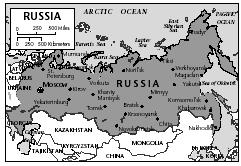 political reforms unleashed a process of democratization that went beyond what he intended. His economic reforms, however, were ill-conceived and half-hearted. The power of the Soviet government and the Communist Party, economic output, the standard of living, and Gorbachev's prestige and popularity, all declined dramatically. More and more power devolved to the Soviet republics, and some sought autonomy or full independence. In June 1991, Boris Yeltsin was elected president of the Russian Republic, despite Gorbachev's opposition. In December 1991, Yeltsin, together with the leaders of Ukraine and Belarus, declared the dissolution of the USSR, making Russia a fully independent state—but considerably smaller than the Soviet Union or the old Russian Empire. Yeltsin's popularity declined during his first presidential term because he was unable to reverse economic distress and growing crime. Nonetheless, he was reelected president in 1996 following a vigorous campaign that emphasized the threat to democratization if his main opponent, Communist Party leader Gennadiy Zyuganov, was elected. The strain of the campaign caused Yeltsin to suffer a heart attack in the last days of the race. Yeltsin's second term was characterized by his precarious health and frequent and prolonged absences from public life, causing policy drift punctuated only by his arbitrary purges of prime ministers.

The structure of the Russian government has been radically transformed several times since the break-up of the Soviet Union in 1990. In December 1993, a new Constitution was passed by the legislature, personally tailored for Yeltsin after he forcibly disbanded the old legislature in October 1993. The new government was a strong presidential republic. The president is directly elected for a four-year term and can be reelected only once. The Federal Assembly is a bicameral legislature, in which the more powerful lower chamber, the Duma , is popularly elected. The upper chamber, the Federation Council, is comprised of leaders of the executive and legislative branches of the 89 republics and regions of the Russian Federation. Legislative deputies also serve four-year terms and can be reelected once. The judicial branch, which is nominally independent, is the least well developed of the three. Federal judges are appointed by the president and confirmed by the legislature. There is a Constitutional Court that rules on legality and constitutionality of governmental acts and on disputes between branches of government or federative entities. The Supreme Court is the highest appellate body. In mid-2000, a new Constitution was drafted, changing the process by which the prime minister's office is filled, requiring the Federal Council to approve the president's appointed candidate.