Gloria Macapagal-Arroyo assumed power on 20 January 2001 with the state of the nation in crisis. She inherited a bankrupt government beset by corruption and favoritism, weak investor confidence, low morality in government, and threat of a military putsch. Society was torn by low moral standards and crime. Further, she has had to show strong leadership while Estrada—a still popular figure—has been undergoing legal prosecution. In March 2001, the Supreme Court stripped Estrada of his immunity from prosecution, and he was jailed in April. In May his supporters took to the streets in protest resulting in the deaths of several people. Arroyo declared a state of rebellion. On 2 October 2001, Estrada was put on trial for 'economic plunder' of $80 million, a charge punishable by death. In her inaugural address, the President declared it her priority to restore public confidence in political and governmental institutions, and laid out four tenets: poverty eradication, moral standards in government and society for good governance, dispensing with personality and party patronage in favor of programs and participatory democracy, and leadership by example based on work ethic and actions.

Her leadership has equally been tested by domestic terrorism and insurgencies with international links. In May 2001 Abu Sayyaf, a terrorist organization linked to al-Qaida took three US citizens hostage along with 17 Filipinos at a luxury resort in Palawan. Abu Sayyaf later claimed to have beheaded one of the Americans. 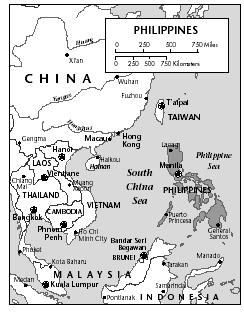 concluded a peace accord with the government in August 2001.

However, as the war on terrorism widened, Macapagal-Arroyo took the politically risky strategy of allowing the US to use Philippine bases in the war against terrorism without formal approval from her Congress. According to the Filipino Constitution, US troops are not allowed to engage in combat on Filipino soil, and in the face of popular opposition to US troops, the President had to postpone operations against Abu Sayyaf on Jolo Island. In February 2003, Macapagal-Arroyo abandoned her diplomatic initiatives and gave orders to the Filipino military to conduct an offensive against Abu Sayyaf and other terrorist groups in Mindanao, resulting late May in a 10-day cease-fire with the Moro Islamic Liberation Front (MILF). In March 2003, a bomb explosion at the Davao airport—one of a series of recent terrorist attacks—had killed 19 people. Critics have faulted her for her ardent support of the US-led war on terrorism.

Her key policy statements in her first 100 days emphasized party reform, meritocracy in the Armed Forces of the Philippines (AFP), and standing firm on territorial claims in the Spratly Islands. In addition she pledged to level the playing field in business, to improve banking and finance, to control public spending, and to modernize the economy with the goal of increasing the country's competitive edge in global markets. In her first 100 days she issued nine executive orders, seven administrative orders, 11 memorandum orders, two memorandum circulars and 24 proclamations. She established a National Anti-Crime Commission to address issues of criminality, although the government's Anti-Money Laundering bill was rejected by the G-7 Financial Action Task Force (FATF) meaning that the Philippines were noncompliant with international norms and subject to sanctions. Increasingly, she makes unannounced visits to neighborhood leaders in the barangays just to chat and to feel the pulse of the nation.

Her decisive action has earned the respect of the business community including the backing of the influential Makati Club. She has also proven an inspiration to young Filipinos, especially to girls who have formed fan clubs such as the Kaibigan ni Gloria Macapagal-Arroyo (KGMAers). Perhaps this is her greatest tribute because resolving the tremendous social, economic and political challenges of the Philippines will require the energy and commitment of young people.