Michael Somare entered the PNG government in 1968, when he was elected to represent East Sepik in the pre-independence House of Assembly. In 1973, he was named chief minister of the Self-Governing Territory of Papau and New Guinea. To this day, he is known affectionately as "The Chief." In 1975, when PNG gained its independence, Somare became the country's first prime minister. His term ended with a vote of no confidence in 1980, and he became the opposition leader. He was reelected in 1982, serving his second term as prime minister until another no confidence 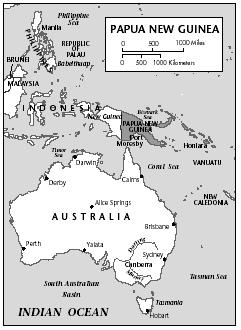 vote in 1985. As opposition leader he was affiliated with the Papua New Guinea United Pati (PANGU Party), which he led several times and resigned from several times. He also served as foreign minister in the cabinet of Prime Minister Rabbie Namaliu, and in 1995, as governor of East Sepik Province. In 1997 Somare founded the National Alliance Party and was elected as its representative to Parliament (MP) from East Sepik province.

In the government of Prime Minister Mekere Morauta, (1999–2002), Somare served first as foreign affairs minister and minister for Bougainville affairs, and then as minister for mining and minister for Bougainville affairs. For more than a decade, armed conflict had wracked the island of Bougainville, where initial violence against a huge copper mine escalated into demands for the island's secession from PNG. Morauta pursued a policy of negotiation, rather than a military solution, following a ceasefire early in 1999. Both Morauta and Somare were sympathetic to granting Bougainville the maximum degree of political autonomy, short of complete independence.

Although progress was made on the Bougainville situation, PNG's economy was in decline during the administration of Morauta, who described the country as "bankrupt." In July 1999, having failed to negotiate acceptable commercial loans or bond sales to cover its budget deficit, the government turned to the International Monetary Fund (IMF) and the World Bank for emergency assistance. Guided by international lenders and donors, Morauta embarked on a privatization program and cuts in government spending. Morauta's economic policies, while applauded by Australia and other lender/donors, were unpopular with PNG's trade unions during a time of high unemployment, and there were two army mutinies in protest of his drastic reductions in military spending.

The June 2002 national elections turned out to be violent and chaotic. Voter fraud was widespread, polls were disrupted, and two dozen people were killed. As votes were counted, Somare's National Alliance Party (NAP) challenged votes cast after an extension of voting time in remote areas. By late July it was finally established that an NAP-led coalition controlled a near-majority in the Parliament. The way was cleared for Somare to regain power when Morauta, in a surprise move, decided not to try to keep his position. Unaffiliated members of Parliament then gave their votes to the NAP. On 5 August, the Parliament elected "The Chief" Somare to once again lead PNG.