Palau became an independent nation on 1 October 1994, ending the Taem era Marikel (American era), which began with the U.S. invasion of the islands in September 1944. One of the toughest battles of the Pacific theater in World War II (1939–45) was fought between U.S. and Japanese forces on the Palauan island of Peleliu. Palau was the last member of the United Nations (UN) Strategic Trust Territory of the Pacific Islands, a political trusteeship established by the UN after the end of World War II. The United States assumed control of the islands in the aftermath of 30 years of Japanese colonial rule. Under the terms of the trusteeship, the United States was given sole military base rights and was mandated to support the political, economic, and social development of Palauans in preparation for their return to self-rule or independence. During its five decades of administration, U.S. policy makers failed to formulate a clear development policy for Palau, and the economy of the islands today reflects this ambivalence.

Palau was ruled in the twentieth century by Germany, Japan, and the United States. Before this, Spain ruled Palau as one of its vast holdings in Micronesia. Economic achievement during the U.S. era was disappointing, but the Americans did leave a legacy of democracy, one that many Palauans seem to think blends well with their traditions. The United States began building democratic institutions in Palau soon after the war. Universal suffrage and representative government were introduced, and the Palau District Legislature was convened in 1948. In the 1970s, the United States began negotiating with Palau and the other Pacific Island trust territories about their political status after trusteeship. Palau began its journey to nationhood in 1978 when Palauans voted 55% to 45% against adopting the Constitution of the Federated States of Micronesia. A national charter and development plan were drawn up the next year. In addition to outlining the political structure and process, the charter contained strict provisions for cultural and environmental protections, including a nuclear-free clause that ignited a controversy that continued until independence. The charter was passed in 1980, after three referenda. The first national elections were held in November of that year, and in January 1981, Haruo Remeliik took office as president of Palau's first constitutional government.

Remeliik served until 30 June 1985, when he was assassinated by a gunman hired by political rival John Ngiraked. His successor, former diplomat Lazarus Salii, shot and killed himself while in office in August 1988. Businessman Ngiratkel Etpison was elected Palau's third president in November 1988. He served one term and ran for a second in 1992 but lost. Kuniwo Nakamura won the November 1992 election for president. He served the maximum two terms, after which the populace elected his vice-president Tommy Remengesau, Jr., to succeed him.

Palauan politics since 1979 have been dominated by the question of approving a Compact of Free Association with the United States. The Compact provides for Palau's military defense and gives the United States an option on one-third of the land for a period of 50 years. In addition, Palau received about US $500 million in economic aid over a 15-year period. The Compact was signed by the two governments on 10 January 1986 but failed to gain Palauan voters' approval in seven referenda on the subject. At issue was the fact that certain terms of the Compact conflict with the nuclear-free provision of the country's Constitution and threaten to undermine environmental protections. A simple majority voted in favor of the Compact in each referendum, but Palau's Constitution requires a two-thirds majority vote to override the nuclear-free provision, and this was never achieved. In 1992, a citizen's initiative brought to the ballot a question asking voters whether or not they favored changing the majority needed to alter the nuclear-free provision from two-thirds to a simple majority. The initiative passed decisively but was followed by a series of challenges in court. These legal hurdles were eventually overcome, clearing the way for sovereignty and enacting the Compact on 1 October 1994.

Palau has a three-branch system of government. The executive branch is led by a president and vice president. The 30-seat legislature, called Otbiil Era Kelulau (House of Whisper Decisions—OEK), is made up of a 16-seat Senate and a 16-seat House of Delegates. A Supreme Court, National Court, and a Court of Common Pleas form an independent judiciary. Suffrage is universal at 18 years of age. 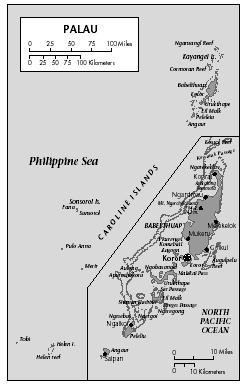