Sultan Qaboos's ascension to power was welcomed by the vast majority of Omanis, who resented his father's reactionary attitudes. Initially, Qaboos's main opposition was centered in Dhofar province, where rebels united against his father's rule. Qaboos requested cooperation from the rebels but only one of the factions surrendered. In 1971–72, two left-wing guerrilla groups merged to form the Popular Front for the Liberation of Oman and the Arabian Gulf; in 1974 they dropped "the Arabian Gulf" from their name. The Popular Front continued their opposition activities, this time against the new sultan. With the assistance of Iran, the United Kingdom (UK), Pakistan, and Jordan, Sultan Qaboos was able to establish his control over the region. Though the Popular Front still opposes the sultan, it is no longer a serious threat.

Qaboos has gained the support of the Omanis mainly by his use of oil income for economic development and increased social services, including education. Under Qaboos's rule, a large number of exiled Omanis have returned to their homeland. These repatriated citizens have offered skills and education that have been an asset to the country's development.

Support grew as Sultan Qaboos worked to balance tribal, regional, and ethnic interests within the structure of national administration. The Council of Ministers, which functions as a cabinet, consists of 26 ministers, all directly appointed by Qaboos.

In December 1991, however, Qaboos acted on his promise to allow opportunities for citizens to take greater responsibility in the reconstruction of the country by inaugurating the Majlis al-Shura (Consultative Council). The Majlis al-Shura is an elected body (although the sultan can override the election results) that reviews legislation pertaining to economic development and social services prior to its becoming law. The body also has limited power to propose legislation. The Majlis al-Shura may request ministers to appear before it. In September 2000, about 175,000 Omani men and women elected 83 candidates, including two women, for seats in the Majlis al-Shura. Further, in December 2000, Sultan Qaboos created a second chamber to complete the Majlis Oman (Council of Oman), appointing the 48-member (including 5 women) Majlis al-Dawla (Council of State). The Majlis al-Dawla acts as the upper chamber in Oman's bicameral representative body, serving in an advisory capacity only.

In November 1996, Sultan Qaboos issued a royal decree which presented "The Basic Law of the Sultanate of Oman" to serve as a form of written constitution. The Basic Law guarantees certain rights of equality and protections within the law and outlines other basic civil liberties. It includes a conflict of interest clause that bans cabinet ministers from being officers of public shareholding firms. The Basic Law also provides the rules for Sultan Qaboos's succession.

In November 2002, Sultan Qaboos extended voting rights to all Omani citizens over the age of 21. This move was seen as a step toward political reform; previously, only tribal leaders, intellectuals, and prominent businessmen were chosen as voters. 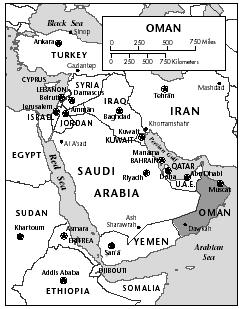