Born on 6 March 1935, at Abeokuta in Ogun State (south-western Nigeria), Matthew Olusegun Fajinmi Aremu Obasanjo belongs to the Yoruba ethnic group. He attended primary and secondary school at the Baptist Boys High School in Abeokuta and enlisted in the Nigerian Army in 1958. He trained at Mons Officers Cadet School in Aldershot, England, and at the Royal College of Military Engineering at Chatham, England. In 1959, he was commissioned second lieutenant and then in 1960, Obasanjo was promoted to lieutenant.

After serving with the United Nations (UN) Peacekeeping Force in the Congo (formerly Zaire) in 1960, Obasanjo began a rapid rise in Nigeria's officer corp. By 1963, he became the commander of the Nigerian army's only engineering unit and received a promotion to captain. He received further 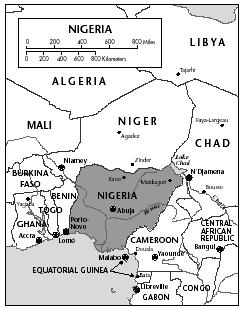 education with the Indian Army Engineering School, and upon completion of the program in 1965, he was again promoted to major.

By the time the Biafran Civil War broke out in 1967, he had been placed in commanding positions and promoted to lieutenant colonel. In 1969, Obasanjo commanded the 3rd Infantry Division of the South-Eastern State and accepted the surrender of the Biafran forces, giving him national publicity. He was promoted to brigadier general shortly thereafter and became commissioner for works and housing in 1975. Later in 1975, he was appointed chief of staff of the Nigerian army. In 1976, Obasanjo became commander in chief of the armed forces and a lieutenant general. After General Muhammed was killed in a 1976 coup attempt, the Supreme Military Council appointed Obasanjo head of state. In 1979, he successfully organized Africa's first voluntary transition from military rule to democracy. After being promoted to general, Obasanjo retired to Ota, near Lagos, and became a poultry farmer. He remained active in African issues, however, attending conferences and committee meetings, and forming the African Leadership Forum.

Obasanjo is currently married to Stella Ajike Abede, whom he met in 1971. Prior to his marriage to Abede, he was married to Oluyemi Akinlaja, with whom he had five children. Obasanjo's hobbies include table tennis and squash. He is also the author of several publications on African politics and the military. In 1991, his bid to become secretary general of the UN failed. General Abacha sentenced him to prison in 1995 for an attempted coup plot.