Tandja has showed himself able to take charge as a leader in pursuit of political and social stability, and financial recovery. Following his election he pledged to improve living standards for workers and uphold the principles of democracy. In June 2000 he issued a statement rejecting the possibility of adopting Islamic shari'a law in Niger, as has been done in the northern states of neighboring Nigeria. Citing provisions of 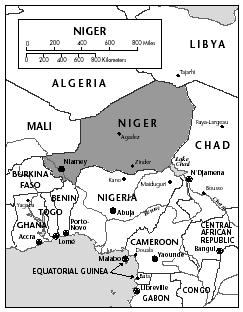 the 1999 Constitution, he pledged that Niger would remain a secular state.

At the end of December 1999, Tandja appointed seasoned politician Hama Amadou as prime minister. Upon taking office, he had declared his intention of cooperating with political opposition forces; however the opposition rejected the posts it was offered in the new government. Tandja's new cabinet, sworn in the following month, included members of both parties that had supported him in the November run-off elections: the MNSD and the CDS (Convention Démocratique et Sociale). He gained 55 votes out of the 83 seat National Assembly, ensuring cooperation from the Assembly and granting amnesty to the perpetrators of the 1996 and 1999 coups.

Although Prime Minister Hama Amadou is secretary-general of the MNSD and has tried to change party rules to favor his candidacy for president, it seems unlikely that Tandja will step down when his term ends in November 2004. Despite inheriting a chaotic economy and bankrupt treasury in 2000, Tandja has managed to improve Niger's international image, restore donor confidence in the country, and handle strikes and social unrest from unions, students, Islamic fundamentalists, and rebel groups. He put down an army mutiny in August 2002, and has consolidated his power by isolating his Prime Minister from ministerial meetings and by making strategic appointments of prefects and other administrative post-acts which have raised accusations from the opposition that he has abused his Constitutional powers. He also has clamped down on press freedoms

While he is favored to win the 2004 elections if he decides to run, Tandja's leadership will be tested in the coming months by the opposition alliance, Coordination des Forces Démocratiques (CFD), which will criticize the government's poor economic management, corruption, rising public debt, and attempts to change the Constitution. Further student and union militancy is expected over loss of entitlements and benefits.