For most of the twentieth century Nicaragua lived under the dictatorship of the Somoza family. After gaining power in a country torn by corruption and conflict between the Liberal and Conservative parties, Anastasio Somoza emerged as leader of the National Guard. Trained by U.S. Marines, Somoza kept close links with the U.S. military. After winning an uncontested election in 1936, Somoza controlled political power as president, or through puppet presidents of his own choosing. After his assassination in 1956, Somoza was succeeded by his eldest son, Luis, who held office for six years. His brother, Anastasio Jr., became chief of the military. Supporters of the Somoza family held the presidency from 1963 to 1967. In 1967 Anastasio Jr. won the presidency in an election filled with fraud and repressive tactics. Despite opposition from his own Liberal Party, Anastasio Jr. was reelected in 1974. By the time of the 1979 revolution, his wealth was estimated to reach US $400 million. Somoza was gunned down years later while living in exile in Paraguay.

The July 1979 revolution, widely supported by the population, ended the 45-year Somoza family dictatorship. A critical moment came when Joaquín Chamorro, owner of the opposition newspaper La Prensa was gunned down on 10 January 1978. A year later, the triumphant Sandinista Front (FSLN), (named for a martyred dissident to the Somoza dictatorship), gained power and formed a revolutionary junta . The junta governed for five years and the political process was restricted to workers' unions, peasants, students, women, and neighborhood organizations. Land reform, literacy campaigns, and healthcare access were central pieces of the new revolutionary government program. Disappointed with the Marxist orientation of the Sandinistas, and opposed to their absolute control of the new Revolutionary Army, key leaders of the July 1979 uprising left the government and boycotted the 1984 elections. One of the most outspoken critics was Violeta Chamorro, editor of La Prensa. She led the democratic opposition to the Sandinistas. In 1984, despite the boycott, 75% of the electorate voted. FSLN's Daniel Ortega took 68% of the vote, and the Sandinistas gained 61 of the 96 available seats in the National Assembly. The validity of the elections, however, was called into question because no opposition leader ran for the presidency.

Ortega and the Sandinistas had to fight a U.S.-funded guerrilla movement, the Contras (Spanish shortened word for "counterrevolutionaries") which they associated with the 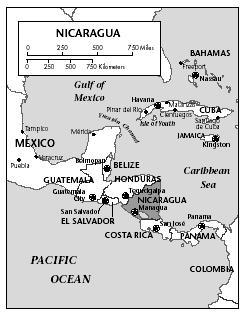 Somoza dictatorship. The role of the United States in aiding the Contras came under heavy criticism and proved to be one of the enduring battles between U.S. president Ronald Reagan and the Democratic Party-controlled Congress. Aided by Soviets and Cubans, the Sandinistas stayed in power. The conflict produced more than 30,000 deaths and half a million displaced and exiled persons, most of whom sought political asylum in the United States. A broad Central American peace accord was finally signed in 1988 under the leadership of Costa Rican president Oscar Arias. The Esquipulas Accord called for a ceasefire and democratic elections to be held in 1990.

In February 1990 Ortega's bid for reelection was challenged by Violeta Chamorro. She questioned the Sandinistas' close links with Cuba and the Soviet Union and reached out to center and conservative parties to help defeat Ortega and regain what she thought to be the true path of the 1979 revolution. The results of the election upset the Sandinistas and surprised local and foreign pollsters, who had expected Ortega to win. During her six-year presidency Chamorro attempted to control inflation, resume growth, and regain civilian control over the Sandinista National Army. Although prevented from seeking reelection and having no political party of her own, Chamorro succeeded in stabilizing the country's economy, dismantling the Contras, and regaining limited control of the army.

In 1996, former Managua Mayor Arnoldo Alemán of the Liberal Alliance Party was elected president on a promise to invest heavily in infrastructure. He managed to fulfill many of his promises in this area, and was greatly assisted in this by the flood of international aid the country received in the wake of the devastating 1998 hurricane. His administration fell into great disfavor, however, in 2000 when a series of scandals were revealed. Many members of his government quit over the improprieties.

The electoral ballot in Nicaragua is probably one of the most complex in the Americas. Voters select candidates for the presidency, National Assembly, and local municipalities from a vast array of political parties. The tedious, complicated process goes forward without the help of technology to count votes and send official tallies to the national electoral office. Consequently accusations of fraud flourish from all political parties.

This article shows how corrupt and dishonest government officials can be if you allow them to get away with it. It also shown that the amount of money that a family has the amount of power they can maintain from generation to generation. The main issue I see with this article is the determination of one woman to make a change and stand up for the wrong doing of people at higher levels of government and shows you that one person can make a change if they put there all into doing so.