Historically, Nepal has been an absolute fiefdom of one family or another. From 1796 to 1846 Prithvi Narain Shah and his descendants ruled. They were followed by the Rana family of hereditary prime ministers. The Ranas were overthrown in 1950, and the royal line of King Tribhuvan came into power. In 1955, his son Mahendra succeeded Tribhuvan to the throne. Elections held in 1959 brought the Nepali Congress (NC) Party into power as the first parliamentary government. They remained in office for little more than a year before the king dismissed the government and banned all political parties.

Under a Constitution promulgated in 1962, King Mahendra established a partyless panchayat (assembly) system. Members of this assembly served only at the king's behest. Even after Mahendra's son, Birendra Bir Bikram, assumed power in 1972, only minor reforms were made.

A coalition of the two major political forces in the country—the NC and the United Left Front (comprised of seven communist parties)—provided the vanguard for widespread political protests that began in 1990. With growing domestic and international pressure, King Birendra announced an end to the panchayat system and agreed to the restoration of multiparty parliamentary democracy. Officially promulgated on 9 November 1990, the new Constitution transferred effective sovereignty to the people. A bicameral legislature was established, consisting of a 205-member Pratinidhi Sabha (House of Representatives), directly elected by universal suffrage every five years, and a 60-member upper house, the Rashtriya Sabha (National Council), most of whose members are indirectly elected by the lower house.

The first elections to the Pratinidhi Sabha resulted in a victory for the NC party. Factionalism, however, led to the government's collapse and new elections in November 1994. The Communist Party of Nepal-United Marxist Leninist (CPN-UML) won the largest number of seats in the new parliament, but not an outright majority. It formed a minority government that survived less than a year before being ousted in a no-confidence motion tabled by the NC. The NC then forged an alliance with the Rashtriya Prajatantra Party (RPP, or National Democratic Party—NDP) and the Nepal Sadbhavana (Goodwill) Party (NSP) to form Nepal's first coalition government. Deuba was appointed prime minister of an unstable coalition government on 11 September 1995. In March 1997, the NC-led coalition fell when several RPP parliamentarians joined the CPN-UML to defeat a confidence motion tabled by the government, ending Deuba's short-lived term as prime minister.

Lokendra Bahadur Chand, leader of the RPP revolt, became prime minister of the new government formed by a coalition between the RPP and the CPN-UML. Shifting allegiances took their toll on political stability again in October 1997 when most of the RPP parliamentary delegation defected from the government to join the NC in voting to bring down Chand and the RPP-CPN-UML coalition. On 7 October 1997 Surya Bahadur Thapa of the RPP was sworn in as prime minister of a new NC-RPP-NSP coalition. Three months later, dissension within the RPP split the party, weakening Thapa. In March 1998, the opposition CPN-UML also fractured into two factions—a majority UML and a minority ML.

These intraparty upheavals left the NC as the single largest parliamentary party. In early April 1998, Thapa resigned under pressure and G. P. Koirala of the NC became the country' s fifth prime minister in less than four years. Koirala 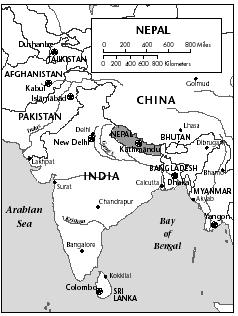 formed a minority NC government with the parliamentary backing of the UML. Soon after winning a vote of confidence, he announced plans for holding elections by May 1999. In August 1998, the ML and NC joined forces, forming a majority coalition.

The arrangement did not last. In December 1998, the ML withdrew from the government. Faced with an impending vote of no confidence, Koirala scrambled for new allies. The UML agreed to throw its support behind Koirala, provided he stuck to his promise of early elections. Subsequently, Koirala's minority government resigned. He then formed a majority coalition government with the UML and the NSP. In January 1999, the new government won a resounding vote of confidence. Soon after the vote, the king announced elections in May. In April 1999, the leftist movement in Nepal suffered a severe blow with the death of the CPN/UML president Man Mohan Adhikari, the only moderate communist leader in Nepali politics. This may have contributed to the communists relatively poor showing in the May elections—they won 68 parliamentary seats compared to 88 in the 1994 general elections. The outbreak of a Maoist insurgency soon followed. The NC won a clear majority, with 110 seats in the 205-member Pratinidhi Sabha. The veteran K. B. Bhattarai ran unopposed for the NC parliamentary party leadership and was sworn in as prime minister on 31 May. His tenure in office lasted less than ten months, however. Bhattarai was forced to resign as prime minister in March 2000 and was replaced by G. P. Koirala. After only sixteen months in office, Koirala stepped down due to the demands of the opposition and a parliamentary vote of no confidence in July 2001. Sher Bahadur Deuba was elected as the new prime minister of Nepal, after winning 72 of 113 votes.

Nepal's aristocracy had been expected to take a symbolic role under the constitutional monarchy, with respected King Bihendra providing a unifying figurehead for the nation. In a shocking turn of events, on 1 June 2001, Crown Prince Dipendra massacred his father, mother, siblings, and other members of the royal family in the palace, and then committed suicide. This left the Crown Prince's uncle to be crowned king. Immediate violent protests greeted the coronation of King Gyanendra, who was mistrusted by the public and accused of implementing a coverup regarding the massacre.

Taking office just one month after the palace massacre and in the midst of ongoing Maoist insurgency, Deuba faced many difficult tasks as the head of state. Deuba convinced Maoist rebels to engage in peace talks for the first time. This unprecedented move gained him widespread support from main parties. A few days into his second term as prime minister, Deuba ordered a ceasefire and proceeded to hold peace talks. The talks were held throughout August and September 2001, but Maoist leaders staged a walkout and broke a truce in November when the government failed to entertain their requests for an end to the monarchy in favor of a constituent assembly. The breakdown of peace talks in November 2001 exacerbated Nepal's already pressing social and economic problems, creating further uncertainty and contributing to instability in the region. While Deuba continued to press for negotiation with insurgents, King Gyanendra issued a state of emergency on 26 November. The call for emergency law initiated some of the most brutal attacks to date as the Royal Nepal Army stepped up aggression toward the Maoist factions. Then, in October 2003, Lokendra Bahadur Chand was once again thrust to the forefront of Nepal's political struggles.