Nauru became an independent republic on 29 January 1968, after 75 years of colonial rule. In 1999, it became a full member of the Commonwealth of Nations. When the United Kingdom (UK) and Germany reached an agreement over their interests in the Pacific, Nauru fell within the German jurisdiction. Though Germany controlled Nauru until the outbreak of the World War I, politics took second place to the interests of phosphate mining, which began in 1907. Agreements between Germany and a British firm to exploit rich phosphate deposits on Nauru shaped the developments on Nauru until the League of Nations mandate was given to Australia, New Zealand, and Britain after the war. Actual administration of the island was in the hands of Australia, through the British phosphate commissioners. 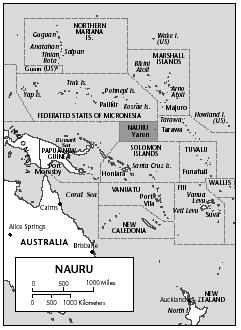 The island and its people suffered terribly during World War II. Even before Japan began its Pacific campaign, German raiders invaded the island on warships disguised as merchant ships, and shelled oil storage tanks in December 1940. The same week as the Pearl Harbor attack (December 1941), Japan bombed Nauru and took control of the island the following August. Japan occupied Nauru from 1942 until the end of the war (1945). The Japanese tried to continue phosphate mining, using islanders as slave labor, but Allied bombing through most of 1943 and all of 1944 prevented this. The Japanese deported 1,200 Nauruans, or two-thirds of the indigenous population, to the Caroline Islands to work as laborers. Five hundred of them died of starvation, mistreatment, and disease; many of those who remained on Nauru died of the same causes; an estimated one-third of the Nauruan population perished during the war. The magnitude of this loss completely disrupted their society, and the shared experience united the survivors in a new resolve. Wartime suffering was the defining experience for those who would lead the way to nationhood 20 years later. When peace came in 1947, the old mandate for administration was replaced by a United Nations (UN) trusteeship, administered by Australia on behalf of the other two trust powers. In 1966, Nauruans were granted self rule as a prelude to independence.

At independence in 1968, Nauru's Constitution established the nation as a republic with a parliamentary system of government. The president might more properly be called prime minister; he is the de facto head of state as well as head of government. He is elected by Parliament from among its elected members; the president appoints and removes the four or five ministers who make up the cabinet. The cabinet is collectively responsible to Parliament, which can remove them along with the president by a no-confidence vote of at least half the members. If Parliament fails to choose a new president within seven days, it is dissolved. The single-chamber Parliament consists of 18 members, elected from eight constituencies for three-year terms. Parliament elects one of its members to preside as speaker; the speaker cannot at the same time be a member of cabinet.

A second tier of government, the Nauru Local Government Council, was created after World War II to help build local government structures, address community issues, and link the local traditional level with the central government. After independence, however, the council took over ownership and control of many of the country's numerous enterprises and investments and thus gained considerable power. The council was dissolved in 1992 amidst allegations of mismanagement. Following an evaluation of investment performance, a new organization, the Nauru Island Council, was formed with a limited mandate to help revitalize the central government on local issues. Responsibility for managing investments was temporarily centralized in the cabinet until they could be brought in line with current financial management policy. These changes required new legislation to set out strategies for handling investments.

The economy and politics of Nauru have been thoroughly intertwined because it was common for individuals to hold seats in both Parliament and the council. Hammer DeRoburt was Nauru's first president and held the office for all but 18 months until August 1989 when a vote of no-confidence forced him to step down. He also served as head chief of the council from 1955 until his death in 1990. Since there are no political parties, electoral politics has more to do with kin relations and personal factions than with issues. Furthermore, the performance of Nauruan business interests affects electoral outcomes, especially when business decisions have been criticized and accusations of corruption raised. The Constitution created a form of government that, combined with the above factors, has since 1995 led to a "revolving door" kind of presidency. Bernard Dowiyogo, who had replaced DeRoburt, was defeated in 1995 by Lagumot Harris by one vote. Within a year, Parliament ousted Harris, once again by a narrow margin. There followed a series of noconfidence motions that brought down another two presidents in less than four months. In February 1997, an island-wide election was held—a year earlier than expected—in an effort to return political stability to the country. Following the general election, Parliament chose Kinza Clodumar as president, but within 18 months yet another no-confidence vote removed him from office.

Government policies have only recently begun to adjust to the reduced income potential as the phosphate resources are depleted. Much of the political instability and shifts of leadership that characterized the late 1990s stem from disagreements over the best ways to deal with this situation.

In 1999, Nauru finally entered the international community by joining the Commonwealth on Nations (May) and the United Nations (September). Parliament gave Dowiyogo a no-confidence vote in April 1999. René Harris became the new president after defeating Dowiyogo by a 10-7 vote in Parliament. A year later, in April 2000, elections were called again, and Harris prevailed but resigned six days later in favor of Dowiyogo. Less than a year after that (on 30 March 2001), Harris won back the presidency following a no-confidence vote, taking office in the eighth government in four years, six through no-confidence votes. On 8 January 2003, Harris was ousted from office after a vote of no-confidence, and was replaced by Dowiyogo. Dowiyogo died following heart surgery in the U.S. on 9 March 2003. An acting president was named, Derog Gioura, a member of Parliament. Dowiyogo's death produced a struggle for power on the island, with Harris contesting reformer David Adeang for the position of president. General elections were held on 3 May 2003, and Harris was returned to Parliament. As of 8 May, it was unknown who would be named president of Nauru.