Than Shwe's first move upon coming to power was to announce, and immediately follow through on, the release of significant numbers of political prisoners. It was widely believed that this was an attempt to placate the international community. Myanmar had been condemned by most Western states for massive human rights violations and most foreign economic aid, including that from multilateral lending institutions, had been cut off pending improvement in this area.

Than Shwe's main rival for attention, legitimacy, and power has certainly been Aung San Suu Kyi, leader of the NLD, landslide victor of the May 1990 elections, and winner of the 1991 Nobel Peace Prize. She was arrested in July 1989 and held in her home, incommunicado, until her July 1995 release. Suu Kyi again endured house arrest from September 2000 to May 2002. Since then, she has been allowed to travel and give speeches around Myanmar, and some dissidents have been freed, but others have been arrested. As Than Shwe has solidified his position as head of the SLORC junta , he has been slow to establish an open dialogue with Suu Kyi, although meetings were held with her during the second period of house arrest. Than Shwe's refusal to hand over power to the NLD has been strongly condemned by the United Nations (UN) and the European Union (EU). 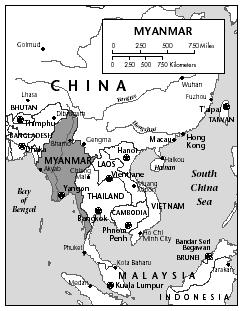 Some observers feel that Than Shwe has served as a balance between the junta's "pragmatists," exemplified by First Secretary Lieutenant General Khin Nyunt, and the "hard-liners" typified by army chief General Maung Aye. Both wings work against a hand-over of power to the NLD, but prefer different tactics in pacifying ethnic insurgencies. Than Shwe is thought to be planning to step down in favor of either Khin Nyunt or Maung Aye, but may be reluctant to do so as the succession could bring an intrajunta power struggle out in the open for the first time. The SLORC renamed itself the State Peace and Development Council in November 1997, and reshuffled the lineup of members, ousting and arresting some high-ranking officers for corruption.