Joaquím Alberto Chissano was born on 22 October 1939, in Malehice, in the Chibuto District of Gaza province in southern Mozambique. He was one of the few children from that area ever to attend school. After primary school in Gaza, he was sent by his parents to Lourenco Marques (now Maputo) where he completed high school; he was regarded as a leader. He joined the small Nucleus of Mozambican African Secondary Students (NESAM) and was its president from 1959 to 1960. He received a scholarship to study in Portugal in 1960, but secretly fled to Paris in 1961 to join the anti-colonial 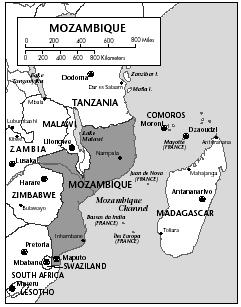 movement. While in Paris, he helped found the Paris branch of the National Union of Mozambican Students (UNEMO), which cooperated with nationalist movements from all the Portuguese colonies and those of other African countries. Chissano became known as a young militant among African student nationalists.

In 1962, Chissano participated in the founding of the Mozambican Liberation Front (Frente de Libertação de Moçambique—Frelimo) and in 1963 was elected to its Central Committee. Chissano served as secretary to the first president of Frelimo, Dr. Eduardo Mondlane. Frelimo was based on a policy of non-racialism and non-tribalism and waged a military campaign to gain independence. Chissano joined the guerilla army that launched operations from independent Tanzania in 1964.