Most of Morocco became a French protectorate in 1912, while a smaller Spanish protectorate was instituted in the north and far south of the country. Spain also retained control of Spanish Sahara (now Western Sahara). A nationalist movement developed during the 1930s and 1940s, leading to eventual independence in 1956. The first head of state was Sultan Mohammed V, who had been a key supporter of the independence movement and took the title of king in 1957. After Mohammed's death in 1961, his son Hassan II was crowned and became head of government. On 23 July 1999, King Hassan died of illness and was replaced by Crown Prince Sidi Mohamed, who became known as Mohamed VI.

Morocco is a constitutional monarchy where power is theoretically shared by the king, the government, and a bicameral Parliament. In reality, however, most power is concentrated in the hands of the monarch. The current Constitution, which was adopted by referendum in 1992 and amended in 1996, gives executive powers to a government that emanates from Parliament and is approved by the king. While the legislative body initiates legislation, the king must agree before any law takes effect. He can dissolve Parliament by decree and call for new elections, and propose his own legislation for popular approval by means of referendum. The monarch signs and ratifies international treaties, can declare a state of emergency, and can rule by decree. He appoints the prime minister and his cabinet, and presides over meetings of the Supreme Judicial Council.

Morocco has a multiparty system with 28 parties, the most important of which is the Union Socialiste des Forces Populaires (USFP). None of these parties challenges the supremacy of the king, and all have joined coalition governments formed under the control of promonarchy formations. The 1993 parliamentary elections caused a major political malaise in the country after the state was accused of having manipulated the results in order to deny the opposition a victory. To end the political crisis, the Constitution was amended, and new elections took place in the fall of 1997. In these elections, three major party blocs, the Koutla (traditional left opposition), the Wifaq (monarchists), and the center received an almost equal number of seats each (102, 100, and 97, respectively). The USFP of the Koutla bloc won the largest number of seats (57) in the Lower House, and its leader, Abderrahman Youssoufi, was appointed prime minister at the head of a coalition government. This event constituted a major departure from past practices but did not fundamentally alter the political map and political process. However, for the first time, members of moderate Islamic movements were allowed to run for office. Nine members of the al-Tawhid Wal Islah (Unity and Reform of Abdelilah Benkirane) movement and the Popular Democratic and Constitutional Movement (MPDC) were elected.

The first elections of King Mohamed VI's reign took place September 26, 2002. The Prime Minister touted these elections as the "first transparent elections in Morocco based on voting by list." The 2002 election did in fact change the political temper of the country, for it resulted in a dramatic increase in both Islamic representation and women's participation in the government. Twenty-six parties took part in the election, with 22 winning seats. The largest number of seats were won by the USFP (social-democrat, 50 seats), Istiqlal/Parti d'Independence (social-democrat, 48 seats), Parti de la Justice et du Developpement (Islamist, 42 seats), and Rassemblement National des Independents (conservative, 41 seats). 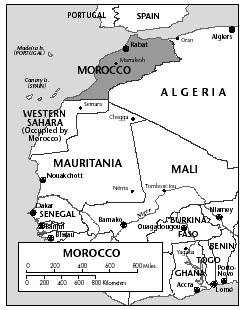