President Leo A. Falcam was born on 20 November 1935, in Pohnpei. He graduated from the University of Hawaii with a bachelor's degree in sociology as the first East-West Center Grantee from the FSM. He pursued his graduate studies at 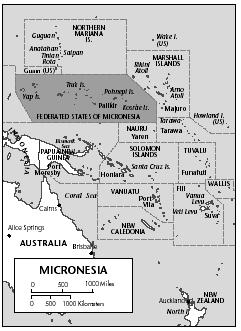 the Woodrow Wilson School of Public and International Affairs at Princeton University, New Jersey. Afterwards, he was delegate and chairman of the Pohnpei Delegation to the 1975 Micronesian Constitutional Convention and was elected as one of the convention's vice presidents. He served as political affairs and executive officer of the High Commissioner's staff in the former Trust Territory Government. He also was assistant district administrator and later district administrator for the State of Pohnpei. President Falcam served as the first liaison officer for the government of Micronesia in Washington D.C., chairman of the Pohnpei Constitutional Convention from 1983 to 1984, first FSM postmaster general, president, and board member of the Bank of the FSM and also was member of the Board of Trustees and Peace Foundation of the Ponape Agriculture and Trade School. He was elected to the Fifth FSM Congress At-Large in 1987 and as a seasoned public servant. He served in numerous posts, including as vice chairman of the Committees on Judiciary and Government Operations, a member of the Committee on Health, Education and Social Affairs, and External Affairs during the Sixth, Seventh, Eighth, Ninth, Tenth, and Eleventh FSM Congresses. His wife's name is Iris.

Why does it say FSM's Personal background when it really is about Leo Falcam? Why not make a website or whatever where you'll have all the all the former presidents in it along with each one's personal information?
2
swider

Can you give us the names of the Micronesian Constitutional Convention Delegates?