Amadou Toumani Touré was born 4 November 1948 in Mopti, Mali. He received his early education in his home village of Mopti and he continued his studies in Tombouctou and Badalabougou. In 1972 he graduated from military school with a rank of second lieutenant in the airborne division. In the late 1970s, he received elite military training in the former Soviet Union and at a training center in Mont-Louis, France. Following this training, in 1978 he was made captain of a parachute battalion of the Mali army. He was also recruited to become a member of the elite Presidential Guard.

By 1988, Touré had achieved the rank of lieutenant colonel. He returned to France for several months of further 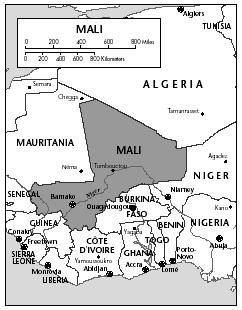 military training in 1990; upon his return he found the country in chaos. The Traoré government blocked Touré's promotion to general and removed him as battalion commander, an action that was deeply disappointing to him. The next year he led force that deposed the Traoré government.

Few details about Touré's personal life are widely known. He is married and the father of two children. Following the elections of 1992, former U.S. president Jimmy Carter invited Touré to become involved with international peacekeeping and social development. Since then, Touré's accomplishments in African peacekeeping and his work with the Carter Center, notably to eliminate the guinea worm from Mali, has been well known. In 1993 Touré established the Children's Foundation dedicated to promoting the rights of children and youth through programs on nutrition and safe drinking water, education, environmental protection, and social peace. Touré also is the president of the Inter-African Network for Street Children, and the vice-president of the Earth Charter.

Touré is one of four facilitators of the peace mission to resolve the conflicts in the Great Lakes region of Africa, comprised of the nations of Burundi, Rwanda, Tanzania, Uganda, and the Democratic Republic of the Congo. His work as a conflict resolution facilitator on behalf of African presidents earned him the 1996 Africa Prize for Leadership awarded by The Hunger Project.