Goyoom has listed the management and development of human resources as being a key priority for the new millennium. This included a look at policies to reduce population growth and enhance the national education and skill levels for employment. He also promised to work for policies to build strong infrastructure and delivery services and facilities; implement sound environmental and natural resources management; strengthen legal, regulatory and justice systems; and maintain prudent management of the economic system and public finances.

Gayoom has tried to transform the Maldivian economy by encouraging development. With its scrub and dense tropical vegetation, the Maldives lacks mineral resources and must import even basic foodstuffs. Gayoom's policies are directed at improving transportation, communication, and small-scale industry among the 20 atoll groups. Fish product processing has been added to fishing as a mainstay of the economy; 80% of the population is involved in some aspect of the fishing industry.

Emphasis has also been given to the development of tourism as Maldives attempts to market its natural assets— beautiful, unpolluted beaches on small coral islands, diving in blue waters abundant with tropical fish, and glorious sunsets. Tourism brings in about US $325 million a year, contributing to about 33% of the gross domestic product (GDP). In 2000, tourist arrivals exceeded 466,000. Private sector services, supported by the growth of tourism, have provided new jobs in the banking, airline, and construction industries. In early 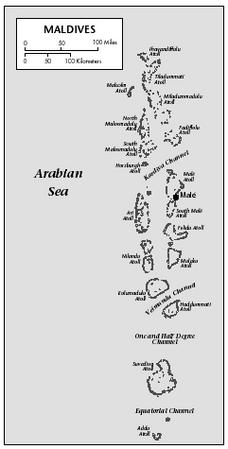 2003, a new threat to Asian tourism arose in the form of the Sudden Accute Respiratory Syndrome (SARS) epidemic. Gayoom responded by hosting a seven nation South Asian conference about the SARS emergency in April 2003.

It is somewhat ironic that the very tourist industry supporting the islands has contributed to the most dire threat against their survival—as airplane emissions contribute much of the pollutants causing Global Warming. The rise in water temperature of two or three degrees has caused more than 90% of the coral to die and lose color in some areas and many reefs are now devoid of fish. Gayoom has been a strong moral voice on Global Warming in the world community, as he tirelessly has spread the word of the danger posed to the Maldives, in speeches at the UN and international conferences. The atoll nation could be entirely submerged with as little as a two-meter (6.6-feet) rise in sea levels, creating a population of "environmental refugees." Locally, tree-planting has been encouraged, and coral mining has been banned. The Maldives, however, has won several tourism awards, including the Green Resort Award in 2002.

The lack of a trained employee base remains the most crucial development problem for Gayoom. Under Gayoom's administration, Maldives National Ship Management Limited, a government-provided service for exporters (and importers) who must ship goods to the nearest trading center, Sri Lanka, has encouraged the export of fish products, handicrafts, and clothing. The Maldives, however, remains in the UN's ranking among the 20 poorest countries in the world. Gayoom intends to devote more government revenue to basic development needs, such as an improved water system and electricity, as only the island of Malé has such infrastructure now. In 1997, Gayoom began a project to ease overcrowded housing and provide a safe haven from rising sea levels or storm surges, by creating a new island, called Hulhumale, from dredged sand. The new island will be higher and larger than any other island in the Maldives.

Education has been somewhat of a concern for the government over the past decade. In the Maldives, modern and traditional schools exist side by side. The traditional schools are staffed by community-paid teachers without formal training and provide basic mathematical and literacy skills in addition to religious instruction. The modern schools, run by both the government and private sector, provide primary and secondary education. Few islands, however, are equipped to provide education for grades above the 10th. There are seven postsecondary technical training institutes. The World Bank has committed us$17 million for education development in 2000–04, with plans to give an additional us$15 million for human development and distance learning during this period.

In March 2001, Gayoom held a national conference for the formulation of a national strategic plan that has been called Vision 2020. Discussion centered around ways to research and develop long-term goals that would keep the country moving forward in social and economic progress. Under Gayoom's leadership, the Maldives' identity has been that of a Muslim nation, with allegations that the rights of Christian citizens have been suppressed. In 2002, four dissidents who had created an electronic newsletter which expressed political views opposing the government were given life sentences for inciting violence and defamation. International human rights groups decried the harsh sentences, which were viewed as a sign of Gayoom's real intolerance of challenges to his authority. The online newsletter was considered a new, non-violent method for political opposition in the Maldives.