Upon becoming president, Muluzi commissioned a panel of inquiry to investigate the murder of four politicians during 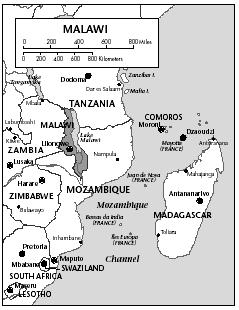 the Banda years. While the findings of the inquiry led to the arrest of six former officials, including Banda, the High and Supreme Court of Appeal acquitted all six, leading Muluzi to criticize the court. His power was weakened significantly in 1995 when allegations swirled that, as secretary general of MCP under Banda, he should be held responsible for the actions of the party. In 1996, Banda apologized to the nation for the "pain and suffering" that occurred while he was president. Muluzi's first term focused on bringing about national healing and creating a climate in which the government's institutions could function democratically. He continued to actively seek foreign investment and aid.

In the 17 June 1999 elections, Muluzi and the UDF emerged victorious in an election marred by allegations of fraud. Muluzi obtained 52.4% of the vote while Gwanda Chakuamba, his main challenger and a candidate backed by the MCP and AFORD, received 45.2%.

Muluzi's support remains confined to the densely populated south in a country where affiliations still determine voting patterns and political loyalties. Northerners continue to support AFORD, while those from the central region support MCP, and most of the southerners support the UDF. As president, Muluzi needs to show that he is capable of transcending the regionalism and past political rivalries, which have made governing acrimonious. Opposition parties demanded that the elections be annulled due to fraud, and decided to take Muluzi and UDF to court. Protests and riots occurred in the northern region of the country.

During the election campaign, Muluzi promised that cabinet members who failed to retain their legislative seats would be excluded from the new government. When he announced his cabinet of 30 ministers and deputy ministers on 28 June 1999, it included two members who had lost their seats in parliamentary elections. Muluzi also failed to increase the representation of women in the cabinet, with only four being appointed. Three of Muluzi's lieutenants—Sam Mpasu, the UDF's secretary general and former information minister, Dumbo Lemani, sports minister, and Joseph Kubwalo of the Defense Ministry—were dropped from the cabinet. These changes reflect Muluzi's attempt to strengthen his control over the cabinet and party by eliminating potential challengers to his authority.

As of October 2001, the UDF held 96 seats in the National Assembly, while the AFORD held 30, and the MCP, 61. Six seats are held by independents who represent the National Democratic Alliance (NDA) opposition group, although the NDA was not recognized as an official political party. The National Assembly has 193 members, of whom 17 are women, including one of the deputy speakers.

The AFORD/MCP alliance remained a major threat to Muluzi's power. A united opposition was likely to make the passage of legislation, especially the budget, difficult. Thus far, Muluzi has refused to create a grand coalition to govern the country. The opposition has boycotted inaugural ceremonies. If he is to be effective, Muluzi needs to demonstrate his ability to bring the opposition into a cooperative framework with UDF.

In early 2002 it was rumored that Muluzi's UDF party would try to enact legislative changes that would allow Muluzi to seek a third term in the 2004 elections. While Muluzi publicly dismissed the idea, many observers expected to see him, with the support of his party members, attempt to extend his time in office.