President Trajkovski has identified the stability and territorial integrity of Macedonia as his first priority. He has noted the need for Macedonia's military to be both technologically prepared and highly mobile to meet any challenge that may arise in the volatile Balkan area. He has also identified ethnic tolerance as the major road to internal stability.

The poorest republic in Yugoslavia during the Communist era, Macedonia enjoyed a modest recovery in the 1990s as its agricultural sector expanded and privatization began. High unemployment and increasing poverty, however, remain problems. In the area of economic development, Trajkovski has cited increased exports and the attraction of foreign investment as priorities. He is a strong advocate of European integration and is committed to cooperation with international organizations including the World Trade Organization (WTO), to which Macedonia has applied for membership, and the European Union (EU), which it would like to eventually join as well.

Violence erupted in March 2001 between government troops and ethnic Albanians, who were vying for equal rights with the Macedonian majority. The fighting destroyed much of the country and caused approximately 170,000 civilians to flee their homes. A peace agreement was finally reached in August 2001 that would guarantee the political and educational rights of ethnic minorities, including proportional 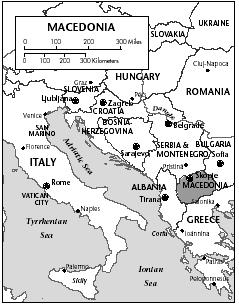 representation in parliament and recognition of Albanian as an official language.

Parliamentary elections were held in September 2002, which saw a change in leadership from the more nationalist VMRO-DPMNE to the moderate Social Democratic League of Macedonia-led "Together for Macedonia" coalition. Branco Crvenkovski became prime minister, and ethnic Albanian rebel-turned-politician Ali Ahmeti led his Democratic Union for Integration party (DUI) to victory for the Albanian community.