In the 14th century Lithuania expanded to the east, defeating Slavic tribes in the process. When Prince Jogaila married Jadwyga of Poland, the two realms merged, creating a dominant power in Eastern Europe. This Polish-Lithuanian state eventually declined and, in the 18th century, fell under Russian domination.

With the Russian Empire crumbling, Lithuania declared its independence on 16 February 1918. Parliamentary democracy lasted only until 1926 when Antanas Smetona seized power. The country was plagued with strained relations with neighboring Poland, which seized and held the capital city of Vilnius throughout the interwar years.

In 1940, Lithuania was annexed by the Soviet Union. World War II was devastating for the country—leaving 280,000 people, or 9% of the pre-war population, dead. After the war, 260,000 people were deported or arrested, and 50,000 died in the guerrilla war against Soviet authority. Under Soviet rule, Lithuania's economy was industrialized, though not as rapidly as Estonia and Latvia. After Stalin's death, the range of freedoms was expanded, though tight controls remained. Open displays of nationalism were prohibited, but they appeared in veiled forms in art, music, and literature.

Changes to the Soviet system, introduced by Mikhail Gorbachev, gradually took hold in Lithuania. Significant change began in December 1987 when members of the Writers Union criticized the slow pace of implementing Gorbachev's policies of glasnost (openness) and perestroika (restructuring) in Lithuania. Sajudis, a political organization independent of the Communist Party, emerged in May 1988 and initially espoused moderate views. Under pressure from Moscow, the Communist Party granted some concessions on nationalist demands, permitting display of Lithuania's flag and the singing of the national anthem. As the result of a public outcry over police attacks on demonstrators, the reform-minded Algirdas Brazauskas replaced a conservative as first secretary of the Communist Party of Lithuania.

In February 1989, Sajudis declared that Lithuania had been forcibly annexed by the Soviet Union and that the group's ultimate goal was to achieve independence. Conservative Communist leaders threatened to crack down on Sajudis, but backed down in the face of mass protests. Sajudis candidates fared well in elections to the Congress of People's Deputies, the newly created Soviet legislative body. Their candidates won in 36 of the 40 districts in which they ran. The Lithuanian Supreme Soviet amended the Constitution to give precedence to Lithuanian laws over Soviet laws. Relations with Moscow deteriorated further in August when Lithuanians joined Estonians and Latvians to demand revocation of the Molotov-Ribbentrop pact. The Communist Party of the Soviet Union harshly condemned the action and the general mood in the Baltics. The Lithuanian Parliament declared the annexation of Lithuania invalid and stripped the Communist Party of its guaranteed monopoly of power. This triggered a split in the Communist Party of Lithuania, leaving a majority faction (led by Brazauskas), which declared itself independent of Moscow, and a minority faction loyal to Moscow.

In February 1990, Sajudis and the Communist Party faced off in the first multiparty elections in modern Soviet history. Sajudis captured an overwhelming majority of parliamentary seats. On 11 March, the Lithuanian Supreme Soviet elected Vytautas Landsbergis president. That same day Parliament formally declared Lithuania to be an independent nation. Gorbachev rejected the action, insisting that separation must be negotiated. In April he ordered an economic blockade of Lithuania, cutting off all oil supplies and reducing natural gas flow to one-quarter of the normal level. The blockade ended on 30 June after the Lithuanian Parliament voted to freeze the declaration of independence for 100 days in order to permit negotiations between Moscow and Estonia, Latvia, and Lithuania. 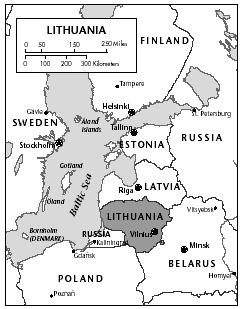 television building, killing 14 and injuring 140. In a March referendum, 90% of voters favored leaving the Soviet Union. It appeared that the Soviet government was intent upon intimidating the other republics by grinding Lithuania into submission.

Everything changed drastically with the failed coup attempt against Gorbachev in August 1991. Hard-line forces within the Soviet government were severely weakened and unable to continue their campaign. Lithuania quickly outlawed its Communist Party and began to dismantle the Soviet secret police. One month later, the Soviet Union recognized Lithuanian independence and agreed to withdraw all troops by the end of 1994.

After gaining independence, Lithuania suffered many problems faced by new states. The political situation was unsteady, with top government posts changing hands as power ebbed and flowed. The deteriorating economic situation put intense popular pressure on the post-Soviet government, composed largely of inexperienced people. Popular discontent with the government and growing political apathy were evident in a May 1992 referendum whereby Landsbergis attempted to increase the powers of his office. Although a majority voted for the constitutional change, voter turnout was so low that the results were not considered valid. In October 1992, Lithuanians again went to the polls to elect a new Parliament, the Seimas. The Lithuanian Democratic Labor Party (LDLP), a successor to the Brazauskas's independent Communist Party, showed surprising strength, trouncing the Sajudis coalition and the Christian Democrat (CD) coalition. The LDLP captured more than half of the seats in the Seimas (Lithuanian Parliament) while Sajudis and the CD coalition controlled only one-third. Under the LDLP, the pace of economic reform slowed. The new Parliament elected LDLP chairman Brazauskas to serve as interim president. The provision for direct election of the president was included in a new Constitution, which was approved by voters at this same time. Under the new Constitution, the president was given power to appoint the prime minister and cabinet, subject to parliamentary approval.

As presidential elections approached, Brazauskas's popularity was evident. In January 1993, Landsbergis pulled out of the presidential race, and Brazauskas was elected with 60% of the vote. Polls indicated that the vast majority of ethnic Russians and Poles, and many Lithuanians living in rural areas, supported Brazauskas. Throughout 1993 and 1994 the economic situation continued to decline, as criminal activity and political bickering increased. Conservatives, charging that LDLP leaders were profiting from the privatization program, failed in attempting to halt it. Lithuania's two largest banks collapsed in December 1995. The prime minister and interior minister were forced to resign when it became known that they withdrew funds from the banks days before the government took them over. Others sought to distance themselves from the scandal by resigning from the LDLP.

By 1996, the Conservative Party, formed from a core group of Sajudis leaders, enjoyed greater popular support. In Seimas elections, conservatives won nearly half of the seats. Thus, with their CD coalition partners, they controlled the Parliament. In 1997, Conservatives won one-third of contested seats in local elections. In 1998, Valdas Adamkus, returning to his homeland after living in the United States for more than 30 years, was elected president of Lithuania. He was defeated by Rolandas Paksas in the second round of presidential elections held in January 2003.