Lahoud began his military career as a naval officer, commanding patrol boats and landing vessels. In 1970, he was transferred to the fourth army division as transportation chief. Three years later, Lahoud was assigned to the army command in Yarze. In 1980, he was promoted to colonel and appointed army personnel director. In 1983, Lahoud became chief of military affairs in the Ministry of National Defense. Promoted to major general in 1985, he briefly served as a deputy to General Aoun, the army commander. Aoun's decision to launch a "liberation war" against Syrian forces in Lebanon in 1989 prompted Lahoud to resign from his official 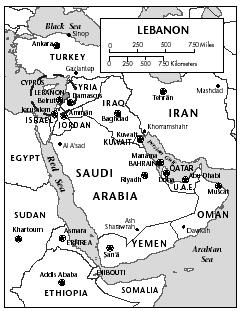 duties. Reportedly dismayed by Aoun's ill-conceived actions, and by the disintegration of Lebanon's army into hostile sectarian camps, Lahoud retreated into private life. Later that year, he was called back to service.

In November 1989, the government of Prime Minister Salim al-Hoss made Lahoud a general and appointed him army commander. He was charged with the task of rebuilding Lebanon's fragmented army. By all accounts, Lahoud successfully accomplished a task many thought impossible. He built an integrated, well-trained military force and ended political and religious interference in its ranks. Most analysts credit Lahoud's record of achievement as army commander for his subsequent elevation to the presidency.

By early 1998, it was unclear whether Hrawi's term, due to expire in October, would again be renewed. He had proven to be a weak leader, and his standing among Maronites was low. Other declared candidates seemed unlikely to win Syria's approval. Lahoud's name surfaced as a potential successor who would be acceptable to the Syrians and have credibility in the Maronite community. His reputation for political neutrality was a further asset. In an early October meeting between Hrawi and Syrian President Hafiz al-Assad, Lahoud was confirmed as Hrawi's preferred replacement. However, certain constitutional obstacles remained. On 13 October, the assembly introduced a unique amendment to the constitutional clause requiring senior public servants to leave office two years before running for president. Two days later, Lahoud was unanimously elected president by the National Assembly. On 24 November 1998, he was sworn in as Lebanon's eleventh president. The election represented the country's first peaceful transition of power in nearly 30 years.