Formerly a part of the British Crown Colony of Gilbert and Ellice Islands, Kiribati became internally autonomous in 1977. It became an independent nation within the British Commonwealth in 1979. Kiribati was separated from Ellice Islands (now Tuvalu) in 1975 based on a postal vote in 1974 in which most of the Ellice people sought separation from the Gilbert Islands. The 1979 Treaty of Friendship between the United States and Kiribati led to the former's recognition of sovereignty over various disputed islands in the Phoenix and Line groups. In return, the Kiribati government must consult with the United States if a third party is allowed access to the islands for military purposes. Furthermore the United States has the right to construct facilities on the islands. Kiribati's independence also provided for the inclusion of Banaba, a former phosphate-mining center, as a part of the new nation despite the contrary wishes of its native residents.

The constitution of Kiribati developed from a convention held at Bairiki on Tarawa in May 1977, involving 200 men and women representing all the islands and various interest groups. A sense of egalitarianism and communitarianism, and a suspicion of central authority have long been part of the Kiribati political culture. The resulting complex political system built in safeguards to curtail the abuse of power.

Kiribati has a unicameral legislature, the National Assembly, known as the Maneaba Ni Maungatabu. In traditional I-Kiribati culture, the Maneaba, found at the center of the village, was the cultural and social center of village life. All villages have the Maneaba to this day; it is the place where information is passed on, ideas are discussed, and consensus is reached. Therefore, the National Assembly embodies that spirit. It includes 42 members, 40 of whom are popularly elected to four-year terms by universal suffrage from each island based on population; 1 appointed seat is reserved for a representative of the Banaban community, and the Attorney General sits ( ex-officio ) as a non-elected member of parliament. If no candidate receives a majority of the votes, a runoff election must be held. Each member of the Maneaba Ni Maungatabu serves unofficially as a social worker and welfare officer, a messenger and interpreter of the laws of Kiribati, and is an ex officio member of the island council of his or her district. 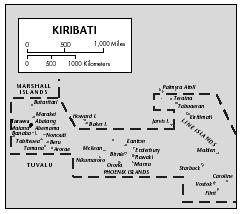 nominated for the election. There is no runoff presidential election. The president has the power to dissolve the assembly and call for general elections, and to govern with an appointed cabinet. While the constitution stipulates that the president cannot serve more than three terms, each term not to exceed four years, the rule was set aside for President Tabai, Kiribati's first president. After a presidential no-confidence vote, the president must resign, and the Council of State (composed of the chair of the Public Service Commission, the chief justice, and the speaker of the National Assembly) assumes the functions of a transitional executive until the new president is elected. While traditional Kiribati politics are party-free, two major political groups resembling parties have emerged: the Maneaban te Mauri Party, and the Boutokaan te Koaua Party. Kiribati's defense force was abolished in 1978 by then-president Tabai.