Mwai Kibaki was born on 15 November 1931 in Gatuyaini Village, Othaya division, Nyeri, in the Central Province. He is the youngest son of Kibaki Githinji and Teresia Wanjiku, both of whom were deceased as of 2003. He has seven siblings, three of whom are living.

Kibaki is the product of elite schools. He attended three primary schools and completed his secondary education at 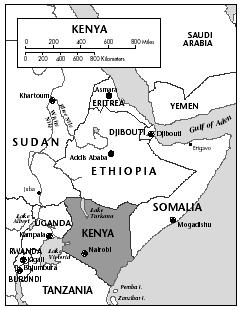 one of Kenya's best schools, Man'gu High School. While in elementary school he learned carpentry and masonry, and grew his own food, as was customary for students at that time. During school holidays, he earned extra money working on buses. At prestigious Makerere University in Kampala, he earned a bachelor's degree in economics, history, and political science. At Makerere he was chairman of the Kenya students association and vice chairman of the Makerere Students' Guild. He graduated with first class honors in 1955 and accepted a position with the Uganda division of the Shell Company of East Africa as an assistant sales manager. That same year he received a scholarship and enrolled at the London School of Economics, where he earned a degree in public finance, graduating with distinction.

After graduation, Kibaki taught at Makerere University as an assistant lecturer in the economics department. Having helped found KANU, he returned home in December 1960 and began his political life with KANU as executive officer.

In 1962, Mwai Kibaki married Lucy Muthoni, a pastor's daughter, and together they have four children. They also have three grand children.