In 1986, riots broke out in Almaty and other Kazakh cities after Soviet leader Mikhail Gorbachev replaced an ethnic 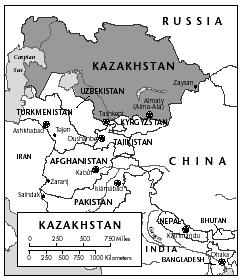 Kazakh with an ethnic Russian as KCP leader. Correcting this error, Gorbachev appointed an ethnic Kazakh—Nursultan Nazarbayev—to head the KCP in 1989. Nazarbayev was also elected chairman of the presidium of the Kazakh Supreme Soviet in 1989, and after a newly elected legislature convened in April 1990, he had it elect him to the newly created post of president of Kazakhstan. Following the failed coup against Gorbachev launched by hard-line Soviet Communist Party officials, Nazarbayev resigned as first secretary and member of the KCP. He was reelected president in an unopposed popular vote in December 1991. He orchestrated a call by a popular body he created (the People's Assembly) to hold an April 1995 referendum on extending his rule until the year 2000. The extension was approved by over 93% of voters. Nazarbayev won reelection to another seven-year term in controversial elections held a year early, on 10 January 1999. The next election is slated for 2006.