In the mid-1990s, there was growing international concern about reports that Saddam Hussein was accumulating chemical and biological weapons, and was even reportedly testing the effects of the weapons on Iraqi citizens. Following the Gulf War, Iraq had demonstrated cooperation with UNSCOM, the special UN commission charged with monitoring weapons of mass destruction. However, Hussein refused to dismantle his country's biological weapons and had stopped cooperating with UNSCOM by August 1997. This led to increasing international tension and a buildup of the U.S. military presence in the region by early 1998.

Despite some modest success in relieving tension through the personal intervention of UN Secretary General Kofi Annan, by December 1998, the United States and the United Kingdom launched a join bombing campaign (Operation Desert Fox) in an attempt to disable Iraq's weapons capabilities.

From the beginning of U.S. President George W. Bush's administration, effecting a regime change in Iraq was a specified goal. In his State of the Union Address on 29 January 2002, Bush called Iraq a member of an "axis of evil," along with Iran and North Korea, and reemphasized his interest in toppling Hussein. Throughout 2002, the United States took an increasingly hardline stance toward Iraq, viewing it as a country potentially possessing weapons of mass destruction, and posing a threat to the United States and the Middle East region. The United States continued to increase its military presence in the Persian Gulf region. British Prime Minister Tony Blair supported Bush's position, but other nations in the European Union (EU) adopted a more reserved diplomatic stance. However, on 8 November 2002, the UN Security Council unanimously passed Resolution 1441, calling upon Iraq to disarm itself of any chemical, biological, or nuclear weapons or weapons capabilities it might possess, allow for the immediate return of UN weapons inspectors (they were expelled in 1998), and to comply with all previous UN resolutions regarding the country since the end of the Gulf War in 1991. UN and International Atomic Energy Agency (IAEA) weapons inspectors returned to Iraq in November, but the United States and the United Kingdom (UK) remained skeptical of any real progress being made by them, and continued their military buildup in the Gulf. France, along with Germany and Russia, opposed 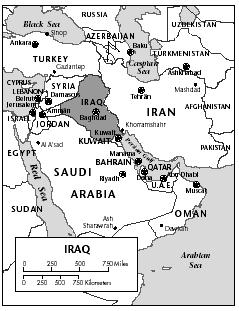 the use of force in Iraq, and diplomatic relations between them and the United States and the United Kingdom were severely tested, leading to what some called a "rift" in the West.

On 16 March 2003, the United States, the United Kingdom, and Spain ended diplomatic efforts to win UN approval for an ultimatum on Iraq's disarmament, which cleared the way for the launching of war without UN Security Council authority. The next day, President Bush gave Saddam Hussein 48 hours to leave the country, and when that did not happen, war began on 19 March with U.S. airstrikes on Baghdad in an attempt to bring down the Iraqi leadership. British troops quickly moved to secure southern Iraq, particularly the city of Basra. In addition to launching continuous air strikes against Iraqi targets, U.S. ground troops moved north from Kuwait toward Baghdad. Baghdad fell to U.S. troops on 9 April, and on 1 May, Bush declared that major combat operations in Iraq had ended, and that "the battle of Iraq is one victory in a war on terror that began on 11 September 2001, and still goes on."

As of June 2003, the number of civilian casualties and the extent of the damage done to the Iraqi infrastructure was unknown, although efforts to provide clean water and sanitation were being addressed. Widespread rioting and looting followed the toppling of the Saddam Hussein regime—including looting of all government offices and national landmarks. Even the Iraq Museum in Baghdad, the county's largest and most important collection of antiquities, was emptied of its priceless treasures by looters.