Aristide became well known for his criticism of Jean-Claude Duvalier, who was appointed president for life in 1971. When Duvalier was removed from office in 1986, Aristide led a 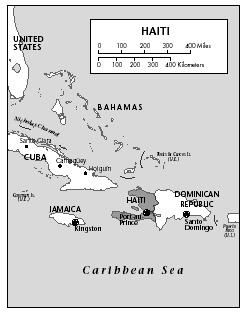 march in remembrance of the 30,000 Haitians who lost their lives during his reign. He soon became the target of attacks. On 11 September 1988, while giving mass, armed individuals burned his church and killed dozens of his congregants. Shortly thereafter he was dismissed by the Salesians, who claimed he was too involved in politics to be the church's representative. Aristide was granted permission to leave the priesthood in 1994. He continued his work in politics against the Duvalier regime, and in 1990 became the presidential candidate for the National Front for Change and Democracy. He titled his campaign "Lavalas," a Creole term meaning a cleansing flood, and won by a landslide in Haiti's first democratic election.

When Aristide was elected to the presidency, he chose René Préval as his first prime minister. Together the two men envisioned a social transformation on a grand scale, based on redistributing the nation's wealth to the poor masses. When the Aristide government was overthrown in 1991, Préval accompanied the president into exile. Aristide was returned to power in 1994 and completed his term in 1995. At that time he was unable to serve a second consecutive term due to constitutional restrictions and pressure from the United States that they be upheld. Aristide was reelected in November 2000, receiving almost 92% of the votes. The election council claimed that 68% of eligible voters went to the polls, but critics believe the actual percentage was much lower. He took office in February 2001.