Guatemala was the center of a great and thriving Mayan civilization between AD 250 and 900. However, by the time the Spanish arrived in the sixteenth century, the indigenous population had abandoned their great centers, dispersed into the central highlands, and organized themselves in ejidos , a communal village-based landowning system engaged in subsistence agriculture. After the Spanish conquest, Guatemala became the regional administrative seat and monopolized Central American trade with Spain. In the 1820s, as Spain's already weak presence in the region gave way to the movement for political independence, the hacienda system was the dominant political force. Although Guatemala established itself as a separate republic in 1839, the governmental system was weak. Essentially the country was governed by local elites, landowners and merchants operating a kind of feudal system, which minimized the role of the state except for the purpose of raising an army to control the Indian population and harness its labor for the development of commercial enterprises. The introduction of coffee in the 1870s, coinciding with the rise of the Liberal movement and the reign of one of Guatemala's most notorious dictators, Justo Barrios (1873–85), reinforced this structure. For the most part, Guatemala's political history has been one of authoritarian governments controlled by the military, responsive to the landed elites, and hostile to the indigenous population. The most notable exception was the period from 1944–54, when two democratically elected leaders, José Arévelo and Jacobo Arbenz, brought an era of political openness and reform. Arevélo was a populist, whose six-year term saw the emergence of urban trade unions and the promulgation of pro-labor laws, a flowering of political freedoms and parties, and the institution of a social security system. Arbenz, a military leader who was nonetheless drawn 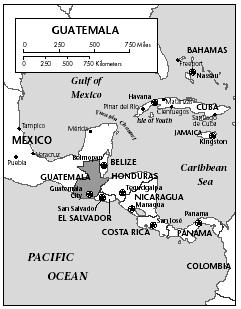 to the promises of Marxism, sought to transform Guatemala through a program of nationalist economic development and agrarian reform. He was overthrown in 1954 by a coup orchestrated by the U.S. Central Intelligence Agency (CIA) that brought the military back into control of the country's government for the next 30 years.

From 1960 to 1996, a brutal civil war, pitting the Guatemalan army against a rural-based guerrilla insurgency, terrorized the country. The repression of the population escalated beginning in 1978 with the reign of General Lucas García. During this period, according to its own estimates, the army destroyed 441 villages over a two-year period, and the violence moved into urban areas including the capital. The repression peaked in the early 1980s with the accession of General Efraín Ríos Montt, whose 18-month rule began and ended with coups. All told, more than 150,000 peasants were killed, 45,000 disappeared, 500,000 were internally displaced, and another 100,000 became refugees. A Historical Clarification Commission accused the military of genocide in a 3,600-page report issued in 1999, saying most crimes were committed by the military. During a visit that year, U.S. president Bill Clinton expressed regret for U.S. support for the Guatemalan army during the conflict.

In 1982, four guerrilla organizations joined forces to form the Guatemalan National Revolutionary Unity Party (Unidad Revolucionaria Nacional Guatemalteca—URNG), the chief political arm of the country's leftist opposition. During the late 1980s, Guatemala experienced a transition to democracy of sorts. Since 1985, there have been four "free and fair" elections for new civilian leaders. However, there were few substantive changes in political practice or social policy. The military remained the power behind the elected leader, and repression persisted well after the signing of a peace accord in December 1996.

When Vinicio Cerezo, a Christian Democrat, took office as Guatemala's newly elected civilian president in January 1986, he was faced with high unemployment, inflation running at 40%, and a foreign debt of US $2.5 billion. While he had won over two-thirds of the votes cast in the December run-off election, it was clear where his real support lay. During the campaign, he had assured both the oligarchy and the military that he would not press for banking or land reforms and would stay clear of anything that would scare away foreign capital. Cerezo seemed committed solely to maintaining himself in office. Despite his weathering of several unsuccessful coup attempts, Cerezo's hold on the presidency was tenuous.

In January 1991, Jorge Serrano became the second civilian elected president of Guatemala. Serrano, a businessman and university professor, had been chosen by a newly organized political party, the Solidarity Action Movement (Movimiento para Acción y Solidaridad—MAS), and had campaigned on a populist platform. His New Right coalition hoped to achieve modernization and long-term stability through neoliberal economic policies coupled with new approaches for diffusing social tensions. But in May 1993, Serrano had grown frustrated by his inability to enact his agenda. Following the example of President Alberto Fujimori in Peru, he tried to seize absolute power by suspending the Constitution, but was rebuffed by the military. He then fled the country. The legislature then elected human rights ombudsman Ramiro de Leon Carpio to complete his term. Negotiations between the army and the URNG, with mediation by the Roman Catholic church, began in 1991. In late 1994, after a long impasse, a new round of talks began, this time mediated by the United Nations (UN).

In November 1995, Álvaro Arzú, candidate of the National Advancement Party (Plan por el Adelantamiento Nacional—PAN) won 46% of the vote, beating 18 other candidates but falling short of the 50% needed for victory. In the runoff election on 7 January 1996, Arzú faced Alfonso Portillo from the right-wing Guatemalan Republican Front (FRG). Portillo was the hand-picked stand-in for the former dictator Rios Montt, who would have run but was barred because of his role in the overthrow of Lucas García in 1982. Although Portillo received only 20% of the vote in November, the January election was a cliffhanger. Arzú beat Portillo by just 30,000 votes. Only 37% of the country's 3.5 million registered voters went to the polls.

Arzú accomplished what other presidents could not. Politically isolated from the world community, Arzú was forced to negotiate an end to the civil war. With UN assistance, Arzú and the URNG signed a peace treaty that ended the war in December 1996. Yet, Arzú was unable to curb an alarming wave of robberies, kidnappings, and killings—including the murders of prominent human rights workers and advocates— that followed the end of hostilities between the army and leftist guerrillas. He was also unable to completely institute terms of the 1996 peace accord. Guatemalans had become disenchanted with the PAN by 1999. Portillo, in the meantime, had been building support with a populist campaign that promised law and order. Thanks to a well-managed campaign and relentless attacks against the PAN— and despite revelations that he had killed two men in Mexico in 1982—Portillo won the presidency with 68.3% of the vote. He was 48 when he took office in January 2000.