Ghana has experienced four coups and three republics since it was granted independence from Britain in 1957. The failure of each regime is usually linked to difficult economic conditions and official corruption. The regime of Kwame Nkrumah, the new nation's first prime minister, was marked by increasing levels of authoritarian rule coupled with growing financial mismanagement and economic decline. In 1964, the army and police staged a successful coup d'état, and overthrew the Nkrumah government. A new government was established, headed by the National Liberation Council.

The second republic was inaugurated in 1969, after parliamentary elections gave a majority to the Progress Party, led by Kofi Busia. In response to increasing public discontent with the economy, the military once again seized power. The new government organized itself as the National Redemption Council and was headed first by I.K. Acheampong and later by Frederick Akuffo. Neither leader was able to improve the economic situation or rid the regime of endemic corruption. On 4 June 1979, the Akuffo government was overthrown in a violent coup by a group of junior military officers. The leaders formed the Armed Forces Revolutionary Council (AFRC), with Flight Lieutenant Jerry Rawlings as its chairman.

Rawlings received enthusiastic initial support, but by 1984 the lack of economic progress was generating popular discontent. Several attempted coups were reported between 1984 and 1987. District-level elections scheduled for mid-1987 were postponed until late 1988 and the ban on political parties remained in effect. The elections took place between December 1988 and February 1989, after extensive reorganization of the country at the district level, and with one-third of the seats reserved for Provisional National Defence Council (PNDC) appointees.

Under pressure from Western donor nations, Rawlings announced in July 1990 the formation of a National Commission for Democracy (NCD), whose task it would be to determine the political future of the country. In December 1990, Rawlings proposed the introduction of a new constitution by the end of 1991. The NCD presented its recommendations in March 1991; these included the election of an executive president for a fixed term, the establishment of a legislature, and the creation of the post of prime minister. In May the PNDC endorsed the recommendations as well as the return to a multi-party system, although the ban on political associations was reiterated in no uncertain terms. Later that month the PNDC announced the creation of a 260-member consultative assembly whose purpose was to present a new constitution to the government by the end of the year. In August Rawlings announced that presidential and legislative elections would take place in late 1992. The new constitution, which provided for a president elected to a four-year term by universal suffrage, was presented at the end of March 1992, and adopted in a national referendum in April 1992.

The November 1992 elections were marred by manipulation and fraud leading to an opposition boycott of the second round in which voters elected parliamentary representatives. National Democratic Congress (NDC) candidates won 198 of the 200 legislative seats; the remaining two were won by independent candidates. The government of 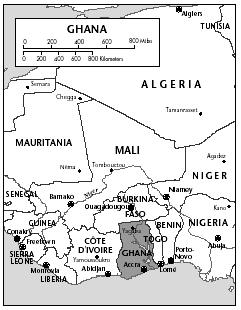 Ghana's Fourth Republic was inaugurated in January 1993 with Rawlings as president.

In the 1996 contest Rawlings again defeated a disorganized and contentious opposition despite efforts by the New Patriotic Party (NPP) and the People's Convention Party (PCP) to unite behind the Great Alliance and a single candidate, John Kufour. Edward Mahama of the Peoples National Convention (PNC) was also a candidate. Some 76.8% of eligible voters cast ballots, reelecting Rawlings with 57.2% of votes cast. Of the 200 parliamentary seats, Rawlings' NDC won 130, the NPP 59, and the PNC 1.

Having completed his second and last constitutional term of office, Rawlings stood down in the December 2000 elections. Kufuor's second-round victory over Rawling's hand-picked successor, John Atta Mills, marked the first time in Ghana's history that one democratically elected president was succeeded by another. In the parliamentary elections, the NPP won 99 of the 200 seats while the NDC returned 92 seats. A by-election gave the NPP absolute majority with 101 seats, with 91 seats held by the NDC and eight smaller parties.

i m a student, i want to know more about the government in Ghana. which is follow
unitary system of government