The tribes that gave rise to the Georgian peoples first settled in the area between the twelfth and seventh centuries BC , making them one of the oldest nations in the former USSR. Georgia has endured waves of conquerors through its long history: Romans, Iranians, Arabs, Turks, Mongols, and the hordes of Tamerlane. Fiercely independent, the Georgians managed to regain independence after each of these invasions. In the nineteenth century, Russia began a step-by-step conquest of Georgia, which it completed in 1878. Georgia gained its independence from the Czarist empire in 1918. By 1921, Georgia gained recognition of its independence from 22 countries, including Soviet Russia. However, in February 1921, the Red Army invaded and conquered Georgia under the orders of Georgian Bolsheviks Sergo Ordzhonikidze and Joseph Stalin.

Despite Stalin's Georgian heritage, and the fact that many of his henchmen in the security apparatus were Georgian, Georgia suffered as much as any region from Stalin's crimes, if not more. During the period from 1950s–70s, the Georgian leadership was known as one of the most corrupt in the USSR, taking frequent bribes from private sector interests. A purge took place in the 1970s, under the leadership of Georgian Interior Ministry chief and later republic Communist Party boss, Eduard Shevardnadze. Perestroika touched off Georgia's drive for independence, which received a decisive boost by the 9 April 1989 massacre of 20 peaceful demonstrators in Tbilisi by Soviet military forces. The massacre turned Georgians against the Communist Party. At the head of one of the opposition groups was a former political prisoner, Zviad Gamsakhurdia, leader of the Round Table coalition of political parties. Gamsakhurdia's coalition decisively defeated the Communist Party in October 1990 elections to the Georgian Supreme Soviet. Gamsakhurdia was elected chairman of the legislature. He closed opposition newspapers, harassed and arrested opposition politicians, and installed his personal representatives throughout the country to ensure his decrees were carried out.

On 31 March 1991, a referendum on independence was endorsed by almost 80% of the electorate. Gamsakhurdia then proposed a formal declaration of independence, which was unanimously approved by the Parliament on 9 April 1991. A month later, Gamsakhurdia was elected president of Georgia by 87% of the popular vote, partly because of the popularity of his defiant anti-Moscow stand but also because of his repression of the opposition.

Gamsakhurdia's increasing authoritarianism alienated many of his supporters. The prime minister, Tenghiz Sigua, Georgian National Guard commander, Tenghiz Kitovani, and other former Gamsakhurdia supporters, joined to topple him. In January 1992, Gamsakhurdia was driven from the city. 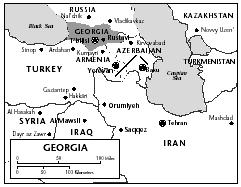 The opposition set up a military council chaired by Kitovani and Jaba Ioseliani, the commander of Mkhedrioni, a paramilitary organization whose name translates literally as "The Horsemen"). They dissolved the Georgian Supreme Soviet and set up a provisional government, headed by Sigua. On 11 March 1992, in an attempt to secure international acceptance in the wake of their takeover, they chose former Soviet foreign minister, Eduard Shevardnadze, as chairman of a new governing State Council.