Bongo was formally elected president for the first time on 25 February 1973 when a new National Assembly was also chosen. He has subsequently won reelection in December 1979, November 1986, December 1993, and most recently in December 1998. Each election, however, has been shadowed by allegations of fraud, disorganization at the polls, and providing false identification and padded voter registration lists to allow Bongo supporters to cast multiple votes.

As one of the world's longest-ruling heads of state, Bongo has proven himself to be a savvy politician. His rise to power in the early 1960s was swift and steady. Upon gaining the presidency in 1967, Bongo undertook to fight tribalism and regionalism, both of which he condemned as dangers to national unity, peace, and harmony. He praised interethnic, interprovincial marriages as vital to the emergence of a Gabonese nationality. He successfully forged strong relations with the French, particularly with the d'Estaing and Chirac governments. Throughout the 1970s and 1980s, his one-party political system was effectively unchallenged, with most opposition groups having been driven out of the country. To consolidate power, Bongo assumed direct responsibility for several ministries. The remaining 40 to 50 cabinet posts were reshuffled as many as three or four times a year—as both a means of rewarding supporters and of keeping potential opposition from gaining a foothold in the government. Members of the government and party leaders were required to take a loyalty oath to Bongo and to the party. Trade unions were consolidated into a single federation, which was affiliated with the PDG. Economically, Bongo favored a pragmatic liberal approach, in which the state has played an active role.

Personally, Bongo has lived a lifestyle of grandeur. He reportedly spent as much as US $300 million for a presidential palace that contains his residence and executive offices. In addition, he spent vast sums of money to host a 1977 meeting of the Organization of African Unity (OAU).

When opposition demands for a multiparty system were backed by popular protest and international pressure in the early 1990s, Bongo responded with brutal force but also went to the bargaining table. Multiparty elections were held in 1993, and Bongo retained the presidency with a scant 50.7% of the vote. Popular protests ensued and were not quelled until Bongo agreed to French-mediated roundtable discussions with opposition groups in Paris. The talks resulted in the establishment of an independent electoral commission. Shortly before the 1998 elections, Bongo succeeded in stripping this commission of many of its powers and handing the duties over to the state-friendly Interior Ministry.

In December 1998, Bongo ran against a fragmented opposition of six candidates, including two rivals from the National Woodcutters Rally (RNB). He was reelected to another seven-year term with 67% of the vote. Pierre Mamboundou, the first runner-up (with 16% of the vote), contested the results and called for mass strikes. Bongo's vast financial resources, his dominance of the broadcast media, and his widespread patronage system gave him an enormous advantage over his opponents. Yet, public reaction was far less vocal than it had been in 1993. Nevertheless, his appointment in January 2003 of Father Paul Mba Abessole, a powerful opposition leader to the post of third deputy prime minister suggests that Bongo must co-opt his challengers to stave off potential threats to his leadership. 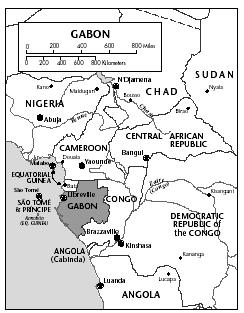