Russian expansion incorporated all of Finland into the Russian Empire as an autonomous grand duchy in 1809. Finland kept many of its political institutions and developed its own cultural and political consciousness under the Tsars. By the end of the nineteenth century, Finnish nationalism was increasingly hostile to Russian autocracy, and the collapse of the Russian state in war and revolution paved the way to Finnish independence in 1917. A brief but extremely bloody civil war followed, in which socialist Reds supported by the Bolsheviks in Moscow were defeated by nationalist Whites.

A democratic Constitution was adopted in 1919, and Finland was one of the few newly independent states in Eastern Europe to sustain democracy and repay its foreign debts throughout the inter-war period. Finnish rejection of Soviet demands for naval bases and other territorial concessions in southeastern Finland led to an invasion by Stalin's army in November 1939. Although its troops performed heroically, Finland was forced to cede most of the heavily populated Karelian isthmus to the Soviet Union in March 1940. Seeking to recapture their lost territories, the Finns joined Nazi Germany as co-belligerents in attacking the USSR in June 1941 but were forced to sign an armistice in September 1944.

Under the 1947 peace treaty, Finland ceded some 12% of its territory to the USSR, imprisoned several prominent politicians, reduced its armed forces, and undertook to pay heavy economic reparations. A Soviet naval base was established only 25 km (16 mi) from Helsinki. A separate Treaty of Friendship, Cooperation, and Mutual Assistance, concluded in 1948 under heavy Soviet pressure, obligated Finland to resist attacks on itself or the USSR and in effect precluded Finland from undertaking any significant foreign policy initiative without the Kremlin's approval. After 1955, when the Soviets withdrew from their Finnish base, Finland became an increasingly active member of the United Nations (UN) and Nordic Council, as well as various Western economic organizations. Despite Soviet pressure, the Finnish Communist Party steadily declined in influence. Finland's standing was further enhanced by the signing of the 1975 Helsinki treaty, which called for pan-European cooperation in security, economic, political, and human rights matters.

Finland's republican Constitution combines a parliamentary system with a strong presidency. Legislative powers are vested in the Eduskunta (Parliament), a unicameral body of 200 members elected by proportional representation from 15 multimember electoral districts. After the 1999 elections, nine parties were represented, but the five largest (and traditional) parties share 176 seats. The normal parliamentary term is four years, but the president may dissolve the assembly at any time. The president is elected directly in a two-stage vote. If no candidate gets a majority in the first round, a second round is held between the two candidates with the largest first-round totals.

Finland's political system is more like France's than most other European parliamentary democracies because of the division of executive power between the president and the prime minister. The president is the constitutionally designated head of state who appoints the cabinet, serves as commander-in-chief of the armed forces, and, until the breakup of the Soviet Union in 1991, played a special role in reassuring the Soviets of Finnish good intentions. Since then, foreign and security policy are responsibilities shared between the president and the cabinet, with the prime minister taking an active role in asserting full Finnish independence. The prime minister serves as the actual head of government, with strong influence on the country's day-to-day affairs. Party leaders with the most seats in Parliament select the prime minister in a complex bargaining process. Since 1945, no single party has ever held an absolute parliamentary majority, 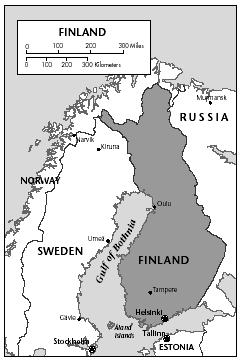 so all political decisions involve coalitions. The cabinet is composed of the heads of government ministries, and has as its primary responsibility the preparation of governmental budgets and legislation and the administration of public policies. The prime minister and cabinet serve only so long as they enjoy the support of a working majority in Parliament, and there have been frequent changes of government.

Jaatteenmaki received 111 votes out of 200, and became the first prime minister elected by Parliament in Finland's history. Jaatteenmaki replaced Paavo Lipponen, and will head a coalition government. She is the leader of the Center Party, governing in coalition with the Social Democrats and the Swedish People's Party.